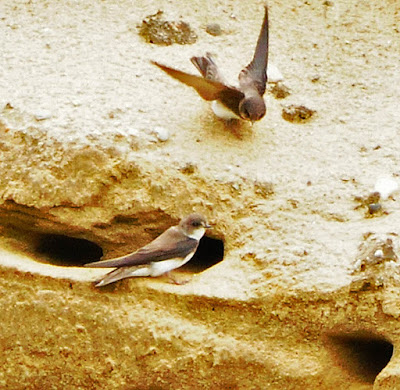 I made a quick trip to Surry yesterday to follow up on Lance Tanino's post to the NHBIRD list where he had seen a colony of bank swallows in a sand quarry on Joslin Rd. I had brought my dog along for some exercise. When I first got out of the car, I saw many swallows whirling overhead but none approached the nesting cavities within the bank. Eventually it became clear to me that even though we were a distance away that we were still within their flight distance. We got back into the car from which I had a good view of the bank. After a couple of minute's wait they started dipping in and out of their nests.

I made some photos but it was a bit of a stretch even for my 500 mm telephoto lens. 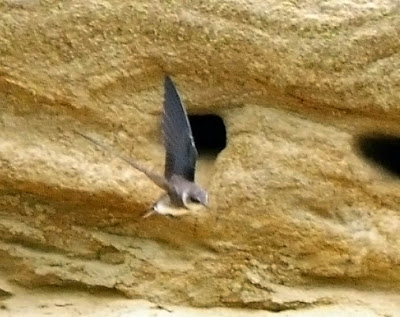 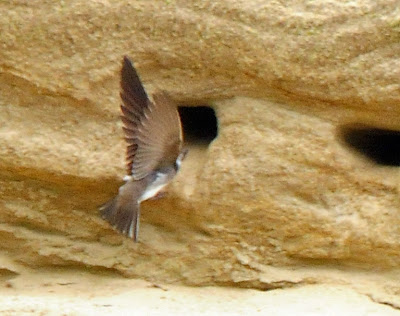 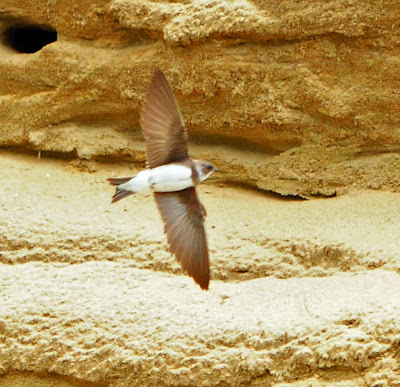 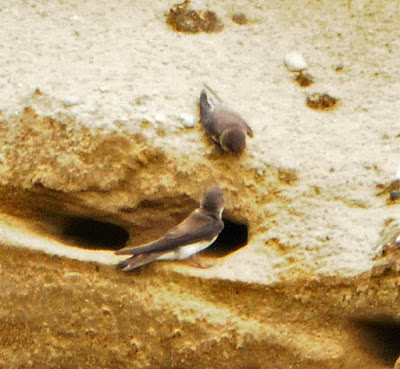 I had looked for bank swallows before and following a tip by Cliff Seifer. I had gone to an area on the CT River, just downstream from and opposite the Vernon Dam. There was nice bank but no swallows and no nesting cavities. According to Pete Dunne's Essential Field Guide Companion on bank swallows "Because of the mercurial nature of Bank Swallow's nesting habitat, established colonies may disappear..." I guess this it what had happened here.

I remember watching bank swallows, called Ufer (=bank) Schwalbe, when growing up in a small village in post-war Germany; I used to wonder how the birds tunneled into a sand bank, but never actually observed them working at it. In middle Europe because of population growth, the swallow has been losing habitat and active breeding colonies are rare. In the States it is classified as a Species of Least Concern.

I had been keeping an eye on a robin's nest below the eaves of our house. I could see movement, could make out 2 or 3 chicks and was watching and waiting for them to fledge, hoping to catch the moment when they left the nest. That was not to be. As I later discovered, the only remaining fledgling was a brown-headed cowbird's offspring. My dog found 2 robin fledglings on the ground, too young and too weak to fly. He brought their dead bodies inside. I found a third one on the ground below the nest. It was still alive, with stubs for wings, almost naked, the soft tissue of its chest fluttering with each breath, few feathers on it's back, a stubby tail and reddish flecked breast feathers. It moved weakly in my hand as I picked it up, lifted its head and opened its yellow beak wide, like the cup of a bright flower. It held it like that for a while but finally closed it again. Its whole wretched being was in my hand, with no future, no parent to feed it, awaiting a slow death by exposure. Poor thing. What was I to do? I could not keep it. But then, then botched it. I smashed it against a rock, but my hand shook so it just grazed the rock. It cried out in pain, terror in its eyes, before I did it again, the proper way and put an end to its poor life. A bizarre thought flashed across my mind, a need to inflict an equal amount of pain on myself, to atone for it, to restore a balance.

P.S. In retrospect, I should have probably tried to get in touch with a local bird rehabilitator.
Posted by Hilke Breder at 6:20 AM No comments:

Great Crested Grebe or do animals share our sense of beauty?

The great crested grebe is the largest of the European grebes. When fancy ladies' hats were in fashion at the end of the 19th century it was almost hunted to extinction, but has made a good recovery and now is fairly common, particularly on weed-rimmed lakes, where it dives for fish. 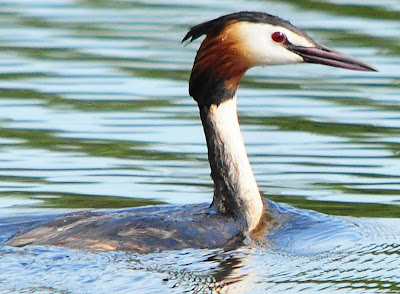 I find it uncanny that the perception of beauty is not uniquely human, that birds, and in fact many animals from insects and fishes up, share our sense of aesthetics. Look at butterflies, reef fish and, secondarily, even flowers. Perception of what are pleasing colors, patterns, arrangements, seems to be hard-wired into the brain, and frequently the females of the species are the specialists; who judge for example which bird’s of paradise display is the most stunning, or which bower bird's staging the most artistic.

Opposing that is the desire to remain physically unattractive to predators. The color black for instance seems to be associated with poor food value. Crows and ravens, also jackdaws, are rarely hunted and eaten, even in times of dire need and famine. I am speculating that it is the much harsher environmen that makes them compete not on the basis of beauty but by survival skills, who is the smartest, the most cunning ... It would be an interesting subject for a study.
Posted by Hilke Breder at 5:55 AM No comments:

Northern lapwings, belonging to the family of plovers, used to be widespread in middle Europe but are being adversely affected by habitat loss due to intensive agricultural practices. It prefers lowlands with little vegetation. I had seen them occasionally in the distance, but was never able to get a good photo until my sister pointed me to a 3 to 4 acre field in Hamburg that had previously been used for hot air balooning. Walking across the dry grassy land interspersed with moist dips and valleys I saw lapwings rising all around me. I was soon surrounded by a vocal aerial flock and realized that I was disturbing their nesting. I beat a hasty retreat, but I did get some nice photos of adult birds though just one of the juveniles hiding in the grass. Juveniles are distinguished by dusky brown around their heads rather than the striking black and white pattern. 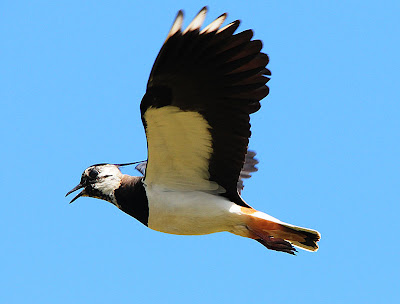 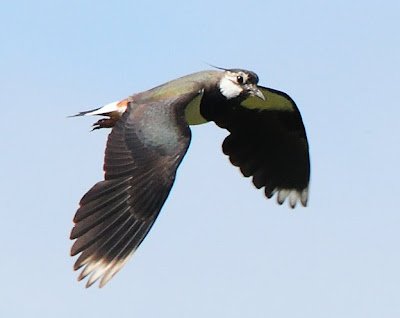 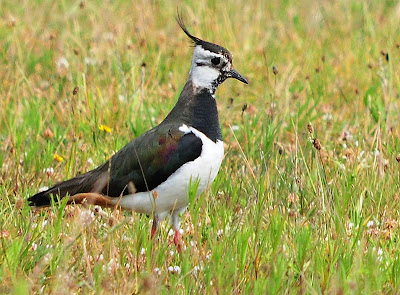 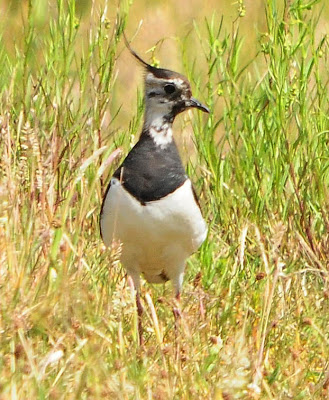 Posted by Hilke Breder at 5:28 AM No comments:

More photos from my recent trip to the North Sea Island of Helgoland:
Black-legged kittiwakes nest in huge colonies on the steep cliffs facing the sea. 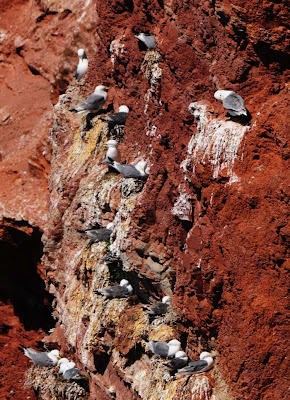 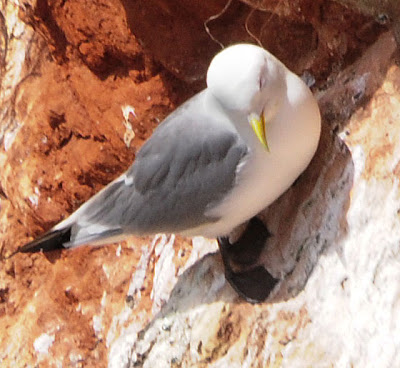 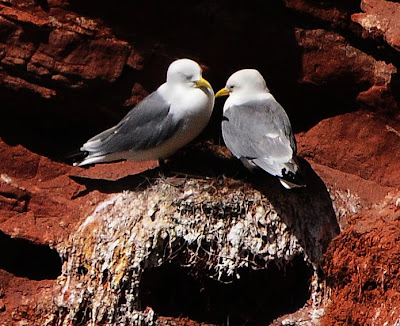 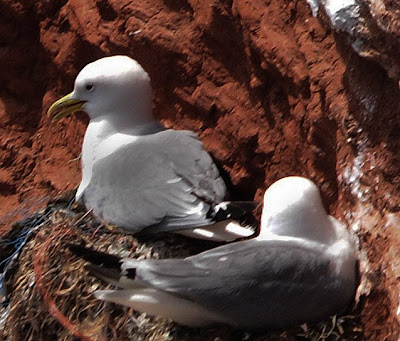 Posted by Hilke Breder at 9:31 PM No comments: 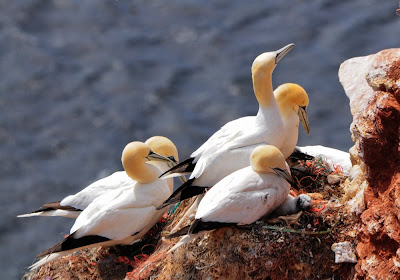 (Click on photos for larger view)
The highpoint of my recent trip to visit my family in Northern Germany was a visit of the North Sea island of Helgoland. The seaside cliffs along the high plateau almost 200 feet above sea level serve as breeding grounds for northern gannets, common murres and black-legged kittiwakes. Walking along the rim of the cliffs on a bright windy day I was looking down on thousands of birds nesting on narrow ledges.

Northern gannets are using brightly colored nylon fishing nets for their nests. I wasn't aware of the deadly consequences until I scrutinized my photos and was horrified to discover dead birds, broken bones, beaks and flight feathers trapped in the tangled flotsam, wherever I looked. These synthetics are indestructible and do not disintegrate no matter how long exposed to light, air or water. 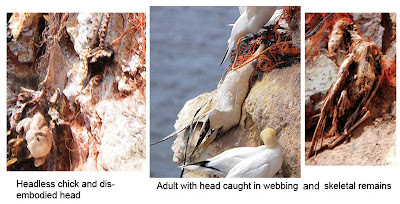 Abandoned or lost nets are a horrific problem in the world's oceans. Such "ghost" nets suspended in the oceans like curtains and stretching over miles of ocean floor will keep on fishing, and trapping and killing marine life, for years to come unless found and dragged out. http://en.wikipedia.org/wiki/Ghost_net

In contrast to the northern gannets common murres do not use any nesting material. They lay their single egg on the bare ledge. Since the eggs are cone-shaped they roll in a circle and are unlikely to roll off. When the youngster is ready to leave the nest the male parent calls them from the water below encouraging them to drop down the sheer cliff. They can't fly but are well-cushioned and do not get injured when hitting the water. It takes another 2 to 3 weeks or so for them to grow wings and to learn to fly and dive. 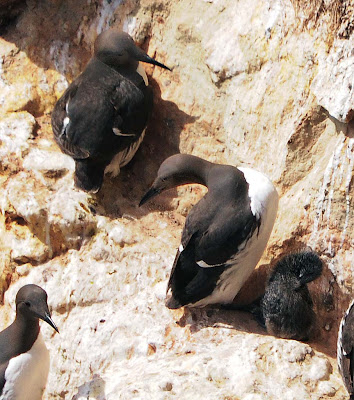 Touching sequence of a N.G. couple exchanging a feather with the chick in the middle looking on. 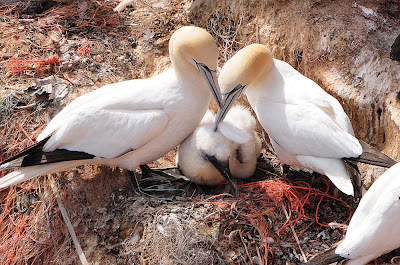 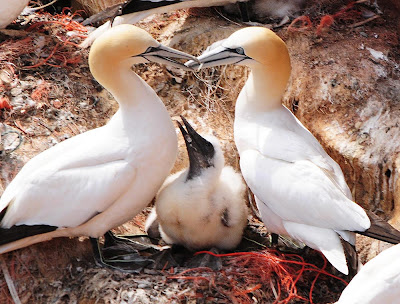 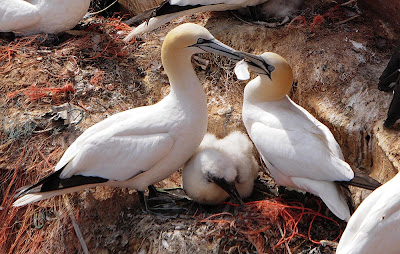 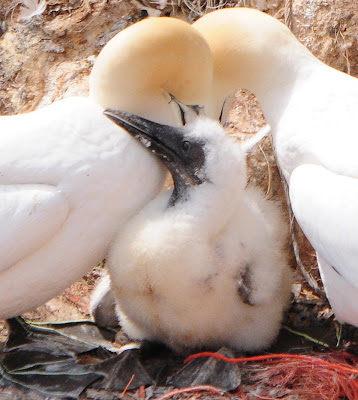 Posted by Hilke Breder at 5:08 PM No comments: