How Google saved my life

White Storks used to be a common sight in the little village in Germany where I grew up. Their return to their old nests each year heralded the true onset of spring - and a new beginning since for us kids any sighting meant a new life was about to be born somewhere in the neighborhood. Gradually over the years sightings of storks became less and less common as the moors and wetlands were being drained to make room for agriculture. 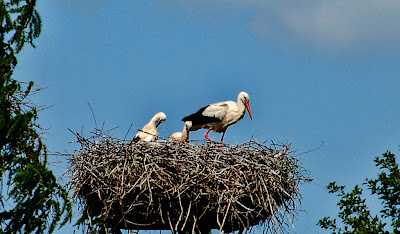 There's only one pair now, and to be sure they stayed, the villager erected a stable platform for their nest. 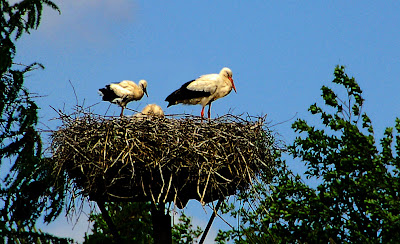 On a trip to Spain though I discovered where our storks had stopped and stayed on their return from their wintering grounds in North Africa. Almost every high building or church spire in the city of  Caceres on the river Tajo had one or more of their massive nests and in the surroundings were plenty of ponds and wetlands to supply their favorite prey, frogs.


A new beginning was what I was looking for too. I am apologizing that for the past several months I have neglected visiting and leaving comments on my favorite birding blogs. I have been dealing with a critical health issue, and so, in this post, I am not going to write about birds, but about how a Google search saved my life.

I had become aware of some problems with my memory, such as blocking on names and words, and had started feeling insecure on walks. I was falling frequently without clear cause, falling on trails, on side walks, into a pond, and in an airport.There was no rhyme or reason to these falls, no stumbling or tripping that I was aware of, and fortunately no serious injuries other than bruises. My walking had turned into a choppy gait when tired and hurrying. My husband remarked on it and demonstrated to me what looked like a Parkinsonian gait.  But I knew it wasn't Parkinson's, since there was no rigidity or joint stiffness. It was also puzzling that these problems appeared only intermittently, days or weeks at a time.

The pattern didn't fit any of the common neurological diseases. My memory problems made me worry, of course, about Alzheimer's disease (AD). My dad had died of it, and I was afraid I was heading in the same direction. As a physician I had taken care of plenty of patients with advanced AD and was horrified of facing that same future, an existence devoid of any joy: the patients never smiled, laughed or showed any pleasure, only occasionally displayed anxiety or anger. It was as if a cataract was blocking their mental access to the world and finally obscured it totally, like this:

I saw a neurologist who however couldn't find anything abnormal and referred me for baseline neuropsychological testing. But it turned out to be more than a baseline. The tests looked like child's play with colorful disks, pictures, cards, photos...but the report, after several hours of testing, and the test results being abstracted into numbers and the scores compared to standard data, showed I was no longer as smart as I once was. The neuropsychologist reassured me however that the test results did not point to AD.

I had done extensive reading on neurological diseases such as Parkinson's, AD and multiple sclerosis and had found none that matched what I was experiencing. So I finally entered my symptoms into Google search and I think putting "frequent falls" first was the tip-off in that a new disease popped up: Adult Onset Hydrocephalus and specifically Normal Pressure Hydrocephalus (NPH).  Everything fit: my many falls, my instability when traversing rough terrain, my memory problems and lastly, which I actually hadn't considered a problem yet, urinary urgency (or the sprint to the BR when observing my dogs relieving themselves before bed time).

The tragedy is that the disease, although rare, is treatable but most of the time is not diagnosed. Many patients, bed-ridden or wheelchair-bound in nursing homes because of inability to walk, dementia and bladder incontinence, may actually be suffering from NPH. Dr. Harold O Conn, a former Yale hepatologist (liver specialist), eloquently recounts his own many-years-long journey as a misdiagnosed Parkinson's patient until a new neurologist came up with the correct diagnosis. He was cured with the placement of a shunt to drain off excess fluid from his brain, and since then has been devoting his remaining years to NPH research.

The CBS program 60 Minutes devoted a segment to this disease which then served as a wake-up call to many patients, their families and to physicians. 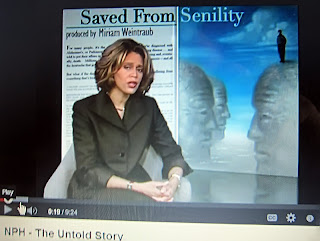 Along with the triad of symptoms - problems with gait, memory, and bladder control - diagnosis depends on showing enlarged fluid-filled lateral ventricles on CT scan or MRI. An MRI of my brain was initially read as normal. However I also happened to have had an MRI in 2003 for an unrelated problem, and a comparison between the two showed that in the current one the ventricles were significantly larger. I was so lucky to have come up with a diagnosis so early in the course of this  disease, which so infrequent, is often missed.

The next steps went pretty fast. I was referred to neurosurgery, had some more testing, and a couple of weeks later was admitted for placement of a shunt which drains the excess fluid from my brain through a thin tube under my skin to my abdominal cavity where it is being reabsorbed into the blood stream.  The symptoms related to my walking resolved within a couple of days; my memory may take a little longer. I am sure of one thing though: a Google search averted a catastrophe and gave me my normal life back!

I am looking forward to go birding again this spring, venture off trail without fear of falling. At 6 AM a couple of mornings ago I heard a Woodcock's twittering wing beats overhead and another one peenting from the wetland across the road. Shortly after, as the sky lightened, a Robin started singing. All day a Tufted Titmouse has been calling loudly advertising his availability as a mate. Last night we heard the first spring peepers in the swamp next to our house. The snow has melted and spring is here!