Over the past month or so I brought home from my trips and daily walks photos that don't fit into any particular category, except they are all of small birds. Small birds in trees and thickets are fiendishly difficult to photograph, because first of all you have to have a clear shot at the bird and secondly you have to have set your camera focus and exposure to capture just a small area within a confusing surround - nothing more frustrating than seeing the bird clearly but the camera finds there is not enough contrast to make the bird stand out and hunts and hunts until the bird has flown off. 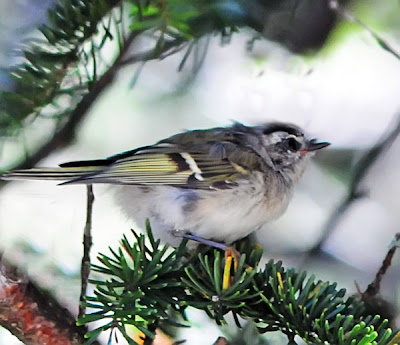 Although Black-bellied Plovers are probably the most widely distributed species of shorebirds in the world, this was the first time that I got a good look at them.  I had taken my nephew, visiting from Germany, on a whale watching cruise out of Newburyport. After our return mid-afternoon  there was still time to look for shorebirds at Sandy Point on Plum Island.
﻿
﻿
On Sandy Point we came upon a row of birders with telescopes who were searching for the BlackSkimmers that had been reported in the area but had not been seen for the past couple of hours. We were in  luck in that the tide was going out exposing the mudflats and tidal pools where a flock of birds was feeding. Watching me photograph these birds would be boring for my nephew but I held out the promise of a meal at the fabulous Plum Island Grille. He stayed on the beach while I slowly made my way across dried mud toward the birds. 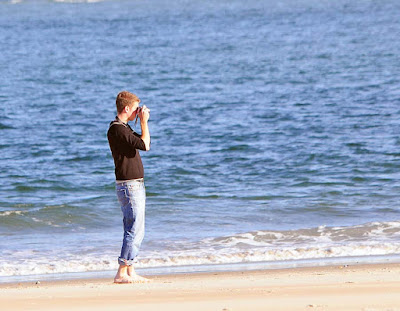 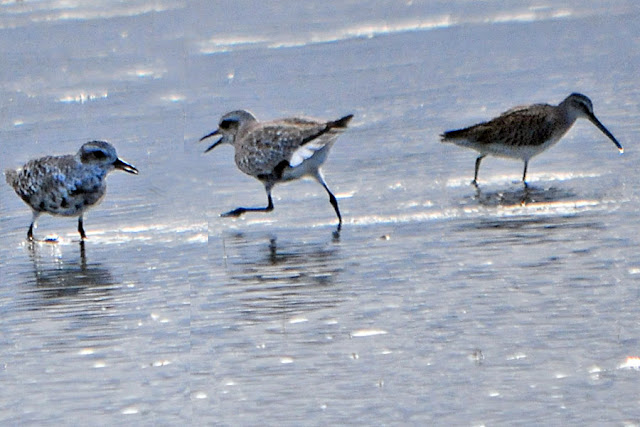 Black-bellied Plovers and a Short-billed Dowitcher .
﻿
﻿The majority turned out to be Black-bellied Plovers. Their plumage varies greatly by age from speckled gray and white in the juveniles to solid black from throat to upper belly in the adult male with silvery speckles on a dark back. In winter they molt into a nondescript ashy gray, only easily recognizable by their black axillaries.

Black-bellied Plovers are vigilant,  always on guard, giving alarm and flying off as soon the perceive some disturbance in their environment. They are not easily approached.  Although much sought after as a game bird,  this wariness, along with their habit of not traveling in dense flocks, probably saved them from decimation by hunters. They breed in the high arctic but for the rest of the year they are present on all coasts world-wide. It is known for it's haunting call:


Clip recorded by Bernabe Lopez-Lantus on 2/19/05 in Uruguay and downloaded from the bird song sharing site xeno-canto.org under the Creative Commons License.


At last we made our way back to Plum Island proper, just in time to grab a couple of seats at the inside bar of the Plume Island Grille for a hamburger for him and a salad with warm goat cheese on bread for me. Delicious!

I had forgotten the directions on my printer at home and was standing now on the wrong side of Sterling Peats after having made my way around bulldozers and large piles of peat, along earthen walls and skirting ditches. I was standing at the edge of a large black peat pond, looking at two birders on a grassy area on the far side. While I was pondering how to get over there, drive around or swim across (:-) a small bird landed near my feet and started picking at the mud, totally unconcerned by my present, a Least Sandpiper. 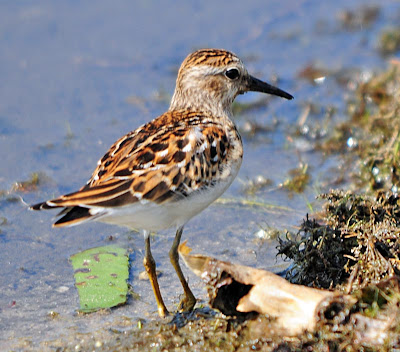 I retrieved my car and drove around the the area until I saw some cars parked along Muddy Pond Road near a dense thicket. I parked and I followed a narrow path through the thicket to the grassy area that I spotted before.

I  joined the throng of birders attracted to Sterling Peats near Worcester, Mass,  by the reports of Stilt Sandpipers and Buff-breasted Sandpipers, but had decided to pick the day after Labor Day to avoid the holiday traffic - to my great regret, it turned out: I had missed the Stilt Sandpipers.

Soon however, a very plain looking bird was slowly walking in the low yellowish grass, blending right in: a Buff-breasted Sandpiper! It took no notice of the three of us standing there. 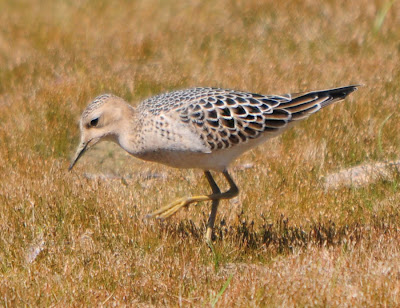 A small group of peeps had gathered at the edge of the pond some distance away, most of them Semipalmated Sandpipers but there were also two Pectoral Sandpipers. 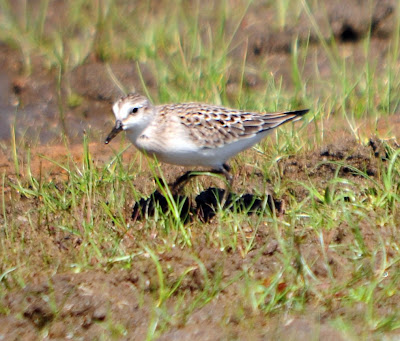 These birds had chosen this area as a stopover on their long-distance travel from their breeding grounds in the subarctic tundra and the boreal northern forest to their winter quarters in the grasslands of Argentina, Uruguay and Paraguay. From the Northeast they fly across the Atlantic Ocean through the Caribbean to South America. The tiny Least Sandpiper, for example, may log almost 2000 miles nonstop across the Atlantic, an amazing feat.

It's a great privilege for us to be able to observe them during their brief stopover here.

This morning I birded Herricks Cove looking for warblers. I came across this bird and am not sure what to make of it. It's a large crop - so the photos are a bit fuzzy. 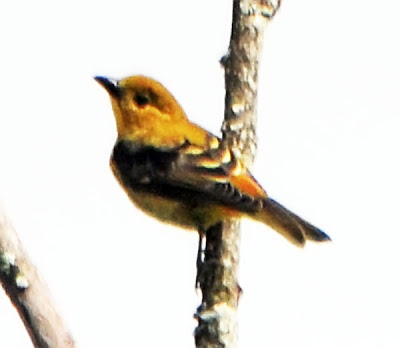 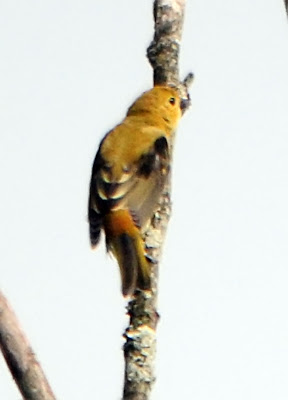 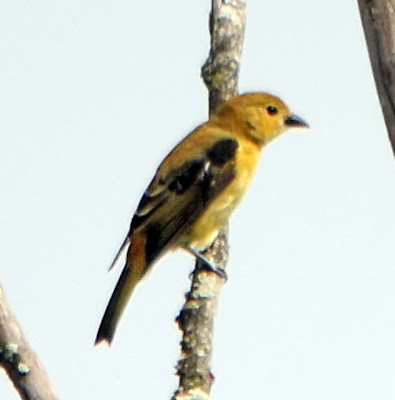 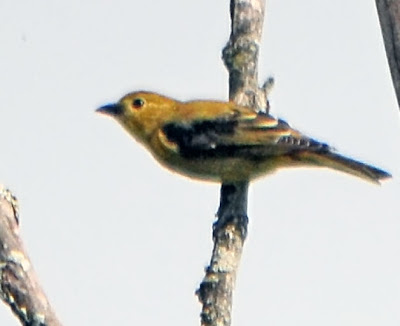 At first I thought it was a molting Scarlet Tanager but the cream-colored edging of the tertials, or the black beak,  do not fit any picture or description that I could find. I'd love to hear your comments.

Thanks for stopping by.
Posted by Hilke Breder at 7:47 PM 10 comments:

Young Snowy Egret, and the Curious Behavior of Crows toward a Turkey Vulture

Snowy Egrets commonly breed along the Atlantic coast from Maine to the Gulf of Mexico and Central America. Post breeding, young individuals often disperse further inland, and one such rare visitor turned up this morning feeding along an overgrown island in the West River. 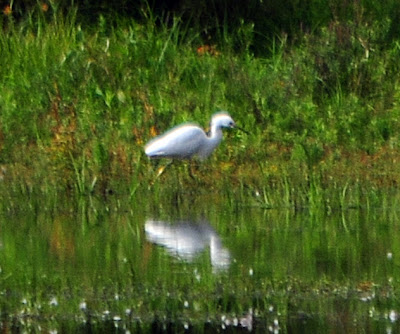 Great Egrets are common migrants here and one happened to be in the vicinity. This photo shows the difference in size.


Yesterday morning, walking along the same trail with the river on one side and a harvested corn field on the other, I saw  a flock of crows, which was feeding on the corn field, rise into the air with a great deal of agitated cawing to follow a large bird flying overhead. Soon the majority settled into a tree by the river, but several birds continued the pursuit until they all disappeared from view. Typical mobbing behavior, I thought, as I was trying to fire off a series of shots to catch the action. Looking at the photos at home however I discovered that the large bird was in fact a Turkey Vulture. 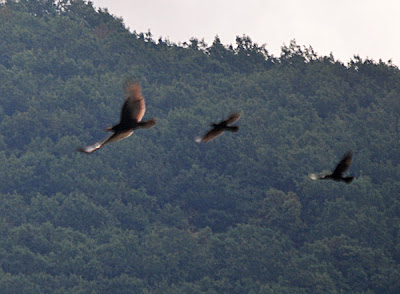 Crows usually don't feel threatened by TVs and don't waste their time chasing them off. So what made them go after the TV here? Young crows perhaps playing a game of pursuit? I tried to find something on Google but nothing turned up. So if one of my readers has insight into the behavior I'd love to hear it.

Thanks for stopping by. If you have time, please leave a comment.
Posted by Hilke Breder at 12:28 PM 7 comments: