The three deadliest threats to our native birds

An icy wind is whipping the tall pines behind our house. Thick snow shrouds everything living. And yet for birds the greatest threats to survival are not the arctic temperatures or lack of food, but man-made barriers.

Wind farms have been touted as one of the most important sources of green energy that may help save our planet from climate change, but are they also giant "bird blenders"? 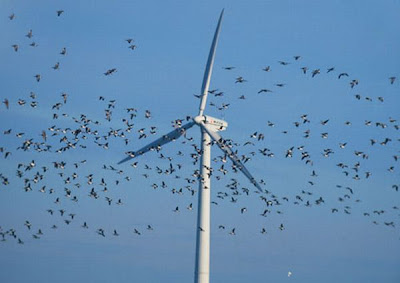 Modern turbine towers can reach a height of 270 feet with rotors as wide as a football field. 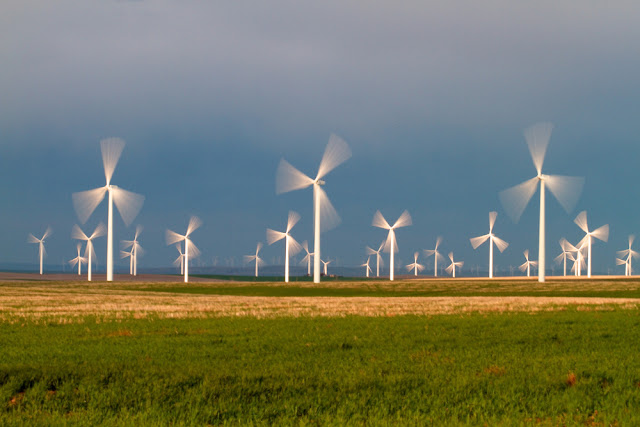 Wind energy suffers from one great disadvantage: the best sites are far from the dense population centers of the Northeast and mid Atlantic states where it's needed most.

Setting up wind farms on the continental shelf along the North Atlantic coast would be one solution.  (See below Cape Wind)

When starting my Google search on wind farms the first study I ran across was about an off-shore wind farm in the Baltic sea published in Biology Letters in 2005. Danish researchers did a radar study, covering the first year of operation, of migrating geese and Eiders negotiating their way through the forest of wind turbines. 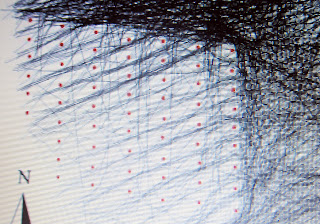 They found that the birds kept a safe distance from the turbines and were flying almost exclusively down the center of the corridors, giving the turbines wider berth at night than during the day.  At first I felt reassured but that didn't last very long. 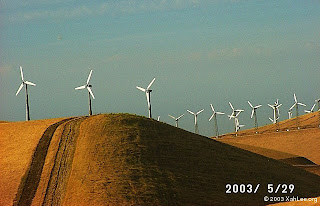 Next I looked at a study of the notorious wind farm on the Altamont Pass in California, one of the largest  in the US. It was built before anyone studied its effects on air-borne wildlife such as birds and bats.

Because of its mountain-top location  it was having a devastating effect on raptor populations, esp. Bald Eagles, Red-tailed Hawks and Burrowing Owls, by generating a warm updraft that would sweep the birds right into the path of the turbine blades, slicing them in half or decapitating them. 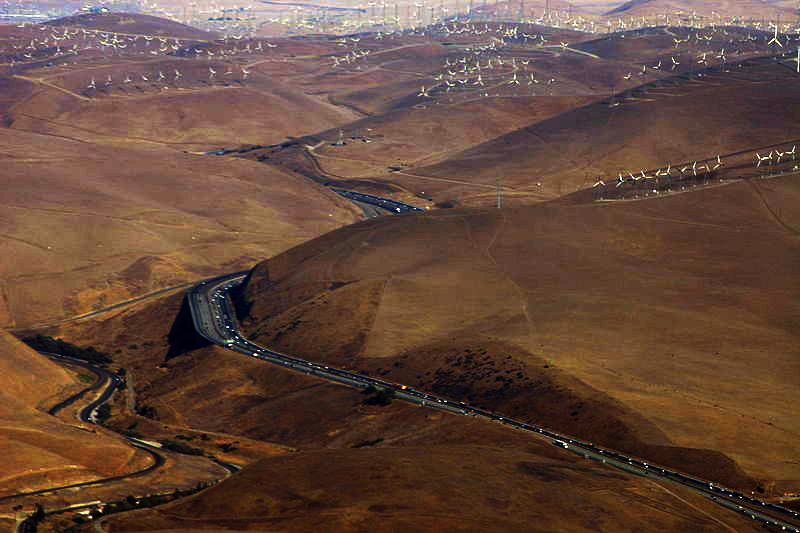 According to one study as many at 1300 raptors die each year in collision with Altamont's 5400 turbines. Worse yet, it's built next to the world's densest nesting area for Golden Eagles.  This and much more is contained in this fascinating 12 min video by KQED Quest. 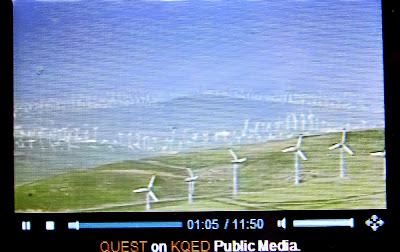 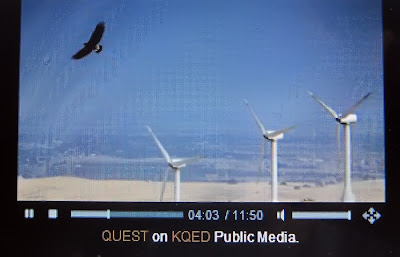 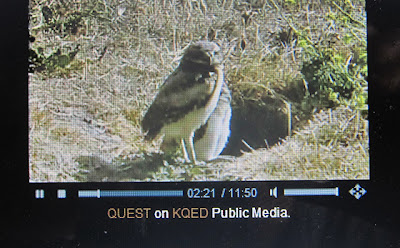 Since then much work has been done to mitigate the impact. In particularly one turbine, that stood on a hill by itself and was responsible for much of the slaughter, was dismantled. Turbine design has been altered so that the birds now tend to fly above the height of the turbines, though some experts say more studies are needed.

A British study of onshore wind farms found that most birds are not harmed during the operation of the turbines. There was a significant decline of bird population however during the construction phase, probably due to interference with nesting. Most migrating birds fly at an altitude of 150 to 600 meters, that is, above the height of the average modern wind turbine (about 100 meters).

Construction of the first off-shore wind farm, Cape Wind, is scheduled to start this year in Nantucket Sound between Cape Cod, Martha's Vineyard and island of Nantucket. See white cross on map below. 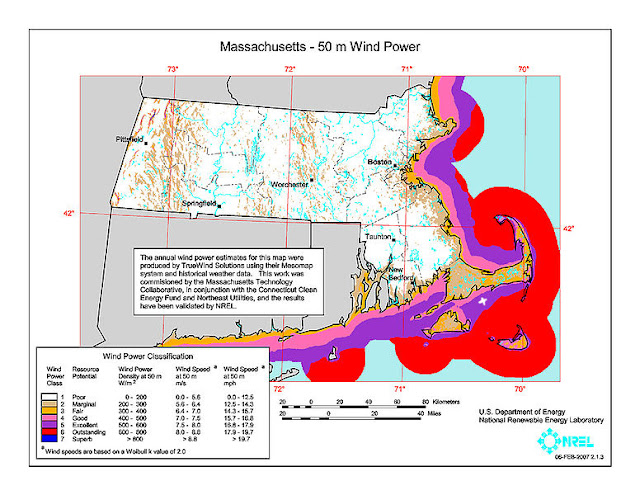 There was much controversy  about the economical benefits vs the detrimental impact on scenic beauty for property owners along the shore and yachtsmen on the sound. Little is known about  Cape Wind's effect on sea duck activity, especially on the most numerous species Long-tailed Ducks. 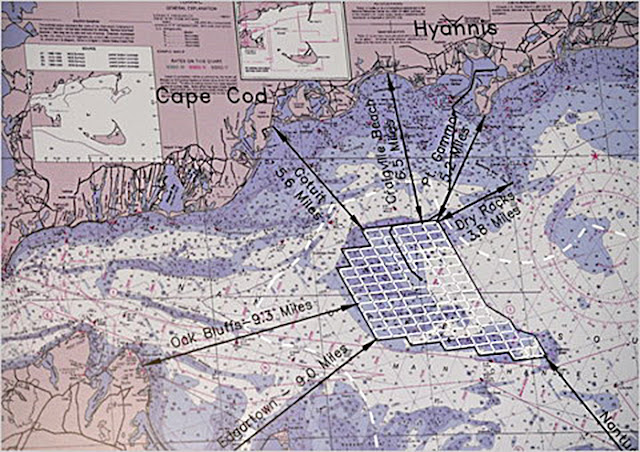 Window strikes are a different matter. Toronto is a deadly city for migrating birds. It's the first tall glass barrier birds face when coming south from the northern wilderness. FLAP - Fatal Light Awareness Program - a volunteer organization in Toronto - has been working diligently toward making windows safe for birds. 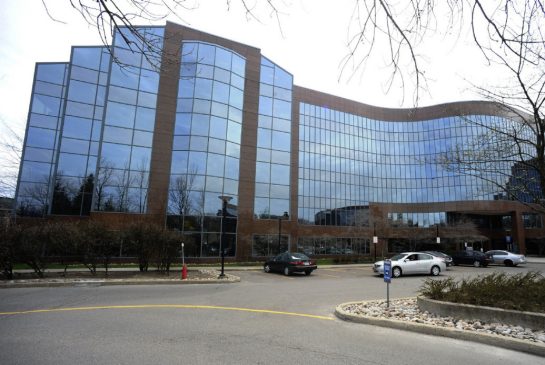 The owner of the most lethal building, Cadillac Fairview,(see above), was sued under the Environmental Protection Act.  Its mirror-like windows were responsible for the collision death or injury of more than 800 birds between March and Dec 2010. The owner was acquitted but only after covering the windows with a special anti-reflective film.

This puts Toronto building owners on notice that they may be held liable for killing birds. Because of the different political climate in the US this avenue would probably not be successful here, but not all is lost. There is one organisation that promotes innovative and  interesting building designs, the American Bird Conservancy. See image gallery.

The Lights Out campaign by the Chicago Audubon Society means lights out in the upper stories of tall buildings during migration:

"Tall buildings can save birds by extinguishing decorative lighting on the upper stories after 11 P.M. each evening and leaving lights off until daylight from August 20 to October 25. Birds migrate throughout these months. Tenants on the upper floors are encouraged to turn out lights or draw blinds after 11 P.M. These recommendations apply to all buildings of 40 or more stories, and to buildings of 20 or more stories that are isolated from other buildings."
Thirty American cities have joined FLAPS drive of turning lights off in tall buildings. Building owners in Manhattan started doing so in 2010 prompted by New York City Audubon.

And for the home owner Bird Conservancy came up with translucent bird tape on windows that is easy to apply and doesn't appear to be too expensive.
Predatory Cats: I love cats, love their sleek gliding movements, admire their coiled spring-loaded body when ready to jump....... I used to own a rescue cat. He was in a crate at my vet's with printed sign "Last Day". I thought about it all day and waited to call until after closing. They answered their phone anyway, and so he ended up in my home. 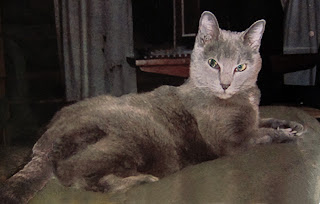 I wanted to keep him indoors but it was next to impossible during the summer when I spent much of my life out on the deck. The cat would yowl behind the window in utter misery. The exhortation to keep cats indoors is easy to follow in city buildings without outside fire escapes, but almost impossible in the suburbs or country unless you confine yourself to four walls. So I let him out. When winter came I discovered that he was a real virtuoso in hunting and killing birds.  I stopped feeding them and did so for the next 14 years. But when he died I vowed to never adopt a cat again.

Mortality by wind turbines or windows pales against mortality inflicted by cats.

In an article in the New York Times one scientist compared  house cats to gypsy moths and kudzu - they all cause major ecological disruption. 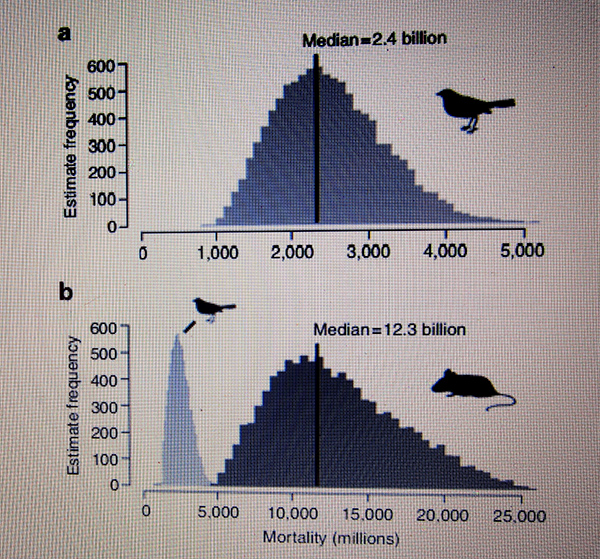 Estimates of annual cat predation on US birds and mammals

It is estimated that cats kill between 1.4 and 3.7 billion (median 2.4 billion) birds a year with 69% of this mortality caused by un-owned cats. Un-owned cats kill about about 3 times the number of birds as owned cats.

Un-owned cats are those that have been abandoned by their owners, have escaped,  or are born as strays. The estimate of these cats range up to 70 million. A female cat produces about 2 litters a year with 4 to 6 kittens per litter. With these large numbers programs such as trap, neuter and release (video)  are ineffective. Many cats that are captured and brought to a shelter are in fact euthanized. 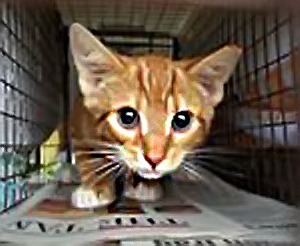 Cats are an invasive species without natural predators. Where introduced they have wrought havoc on natural wildlife. They are easy to keep and easy to lose, since there are no leash laws, no license requirements, and no taxes on cat owners. Unlike dogs they can forage in the wild and sustain themselves on small mammals and birds. There is no opprobrium on owners who let their cats run wild,. and when they have kittens: who doesn't agree that kittens are cute!  Appealing to our emotions may be one of this species' evolutionary survival strategies.
To save birds and other wildlife do we have to be ruthless in eliminating stray cats? This blogger is making a passionate argument for just trap and kill rather than trap, neuter and release, but that would be a losing battle, as a huge cat lovers grass-roots lobby would spring up instantly. 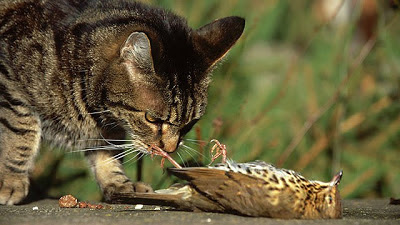 Do cats deserve greater protection than our native birds?

Protecting birds against their cats is left up to the cat owners. Here is what an individual can do to check their cat's predatory behavior: 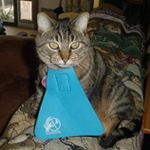 Put a neoprene Cat Bib (see video on website) on your cat, whenever the cat is outside.  It may look ridiculous, but please don't laugh! In a study it stopped cats 81% of the time from catching birds. 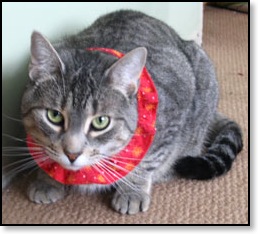 Or have your cat wear a colorful collar which makes the cat much more visible to birds though somewhat less effective than the bib. Here's a YouTube video.

Thus the three deadliest threats are wind farms, windows and wild cats, but cats are by many magnitudes the deadliest.  We as individuals can't do much about the first two, but must do something about the last, because there is no authority that will jump in and bear that responsibility for us.
Posted by Hilke Breder at 6:17 AM 11 comments: