Summer is winding down. The first cool nights are here. The bird population in our yard is changing. I haven't seen any Robins for some time doing their running, stopping and listening for worms in the ground. It's oddly silent except for the raucous cries of the Blue Jays and Crows. I still hear an occasional Gray Catbird, though, giving its cat-like calls from deep inside a shrub. 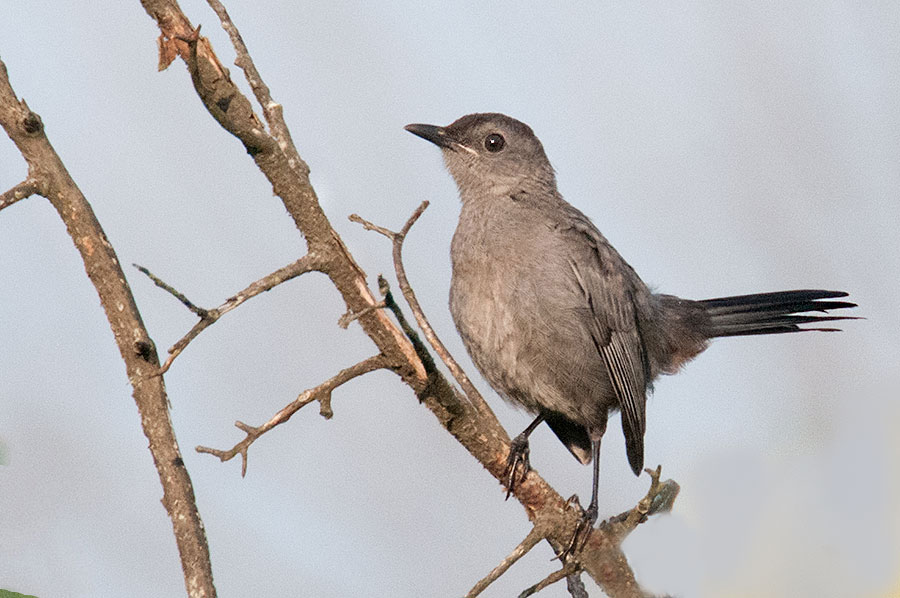 This one is was sitting out in the open and was about to launch into flight. 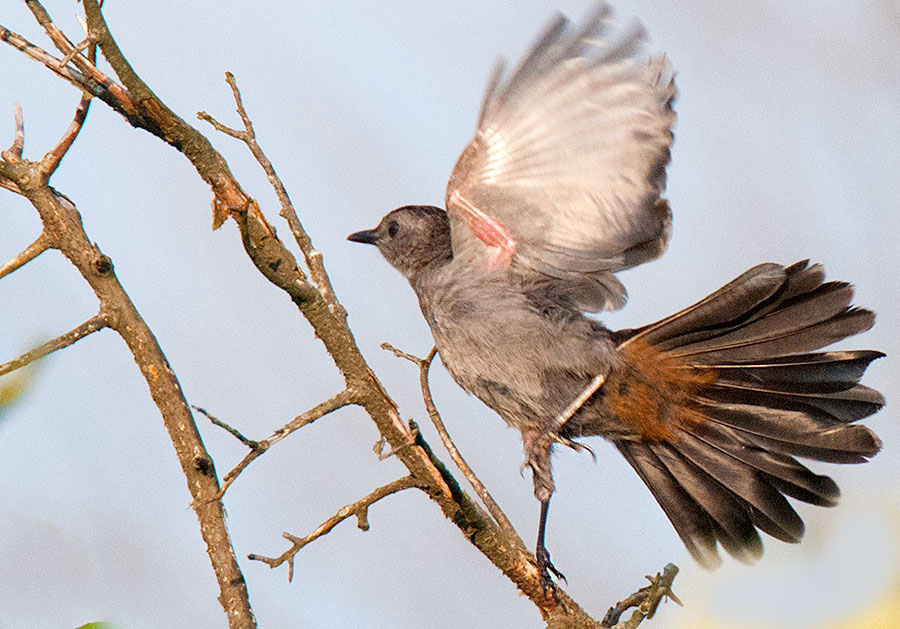 A couple of weeks ago three or four Chestnut-sided Warblers were moving around in the thicket close to our driveway with one of the them looking like a male. I went  to get my camera, but then only found this one bird, probably a first year youngster. 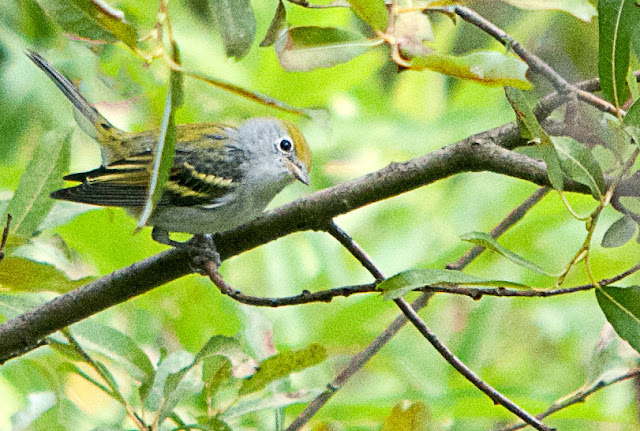 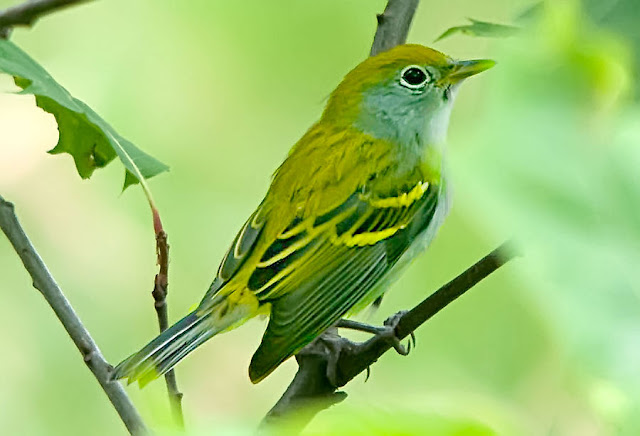 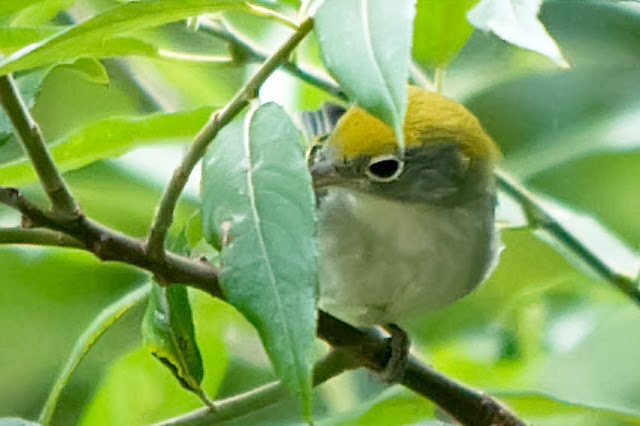 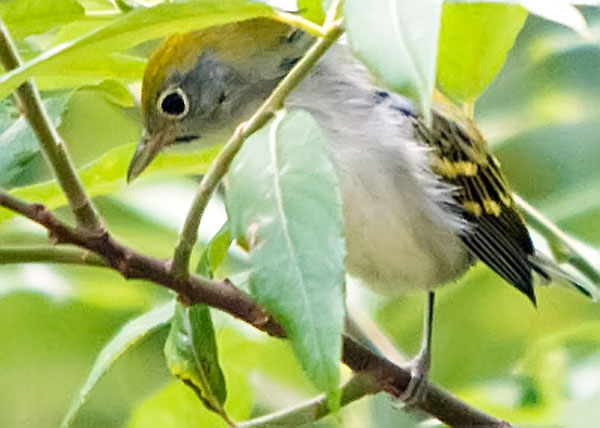 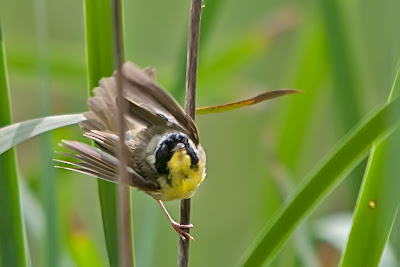 Dragon flies and butterflies abound. Avian migration in the fall is kind of protracted and all you can do is be on the lookout. In my next post I'll talk about Nighthawk migration.

Watching Northern Gannets is fun, except when it's not 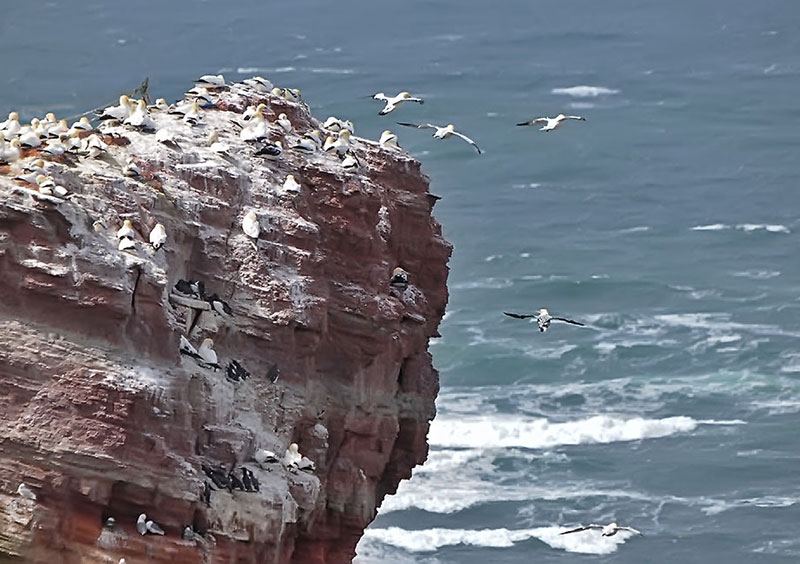 The high point of my visit to my birth place in Germany in 2009 was a trip from Hamburg down the Elbe River to the diminutive island of Helgoland in the North Sea, 29 miles off the coast. The side facing the sea is a 200 feet high rock cliff, home to thousands of sea birds, mostly Northern Gannets, Common Murres and Black-legged Kittiwakes. It was a gorgeous day, bright sun, blue skies. I had only a few hours to photograph the birds, no way of avoiding the mid-day sun with its harsh lights and shadows. But losing myself  in the moment, I was happy and kept firing away at the awe-inspiring assembly of nesting Northern Gannets. 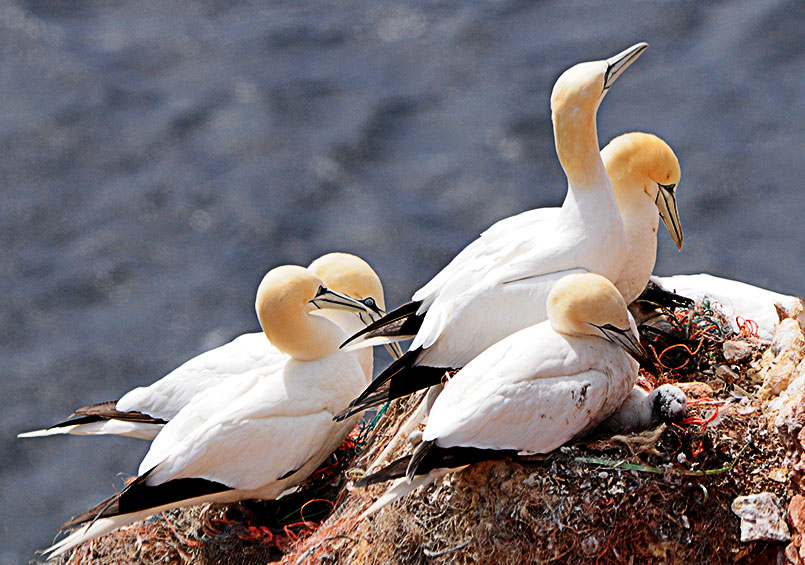 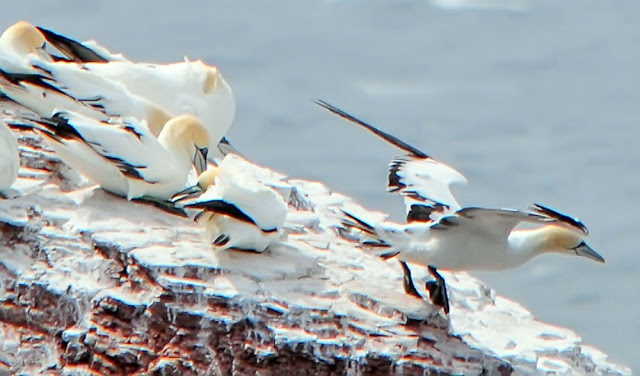 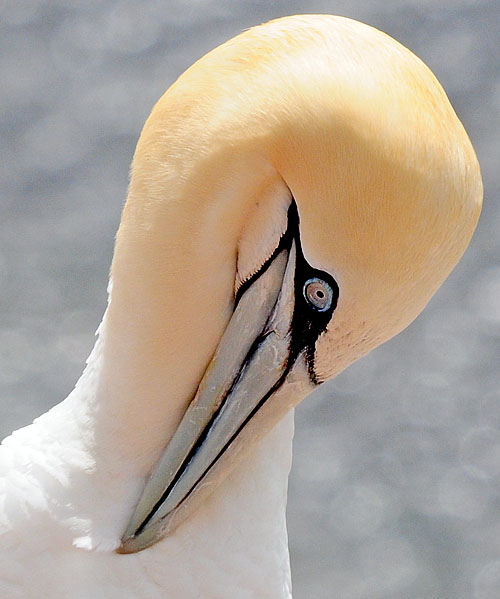 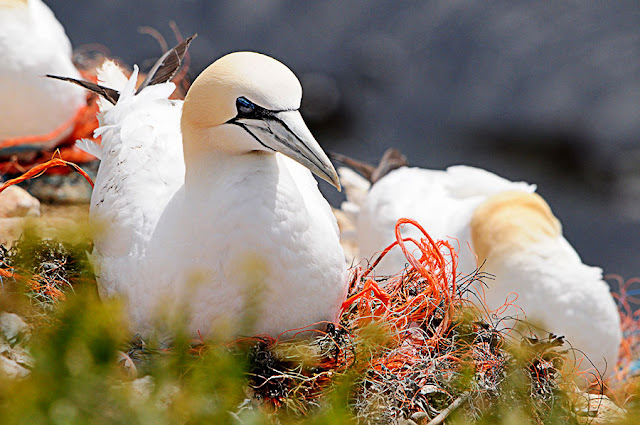 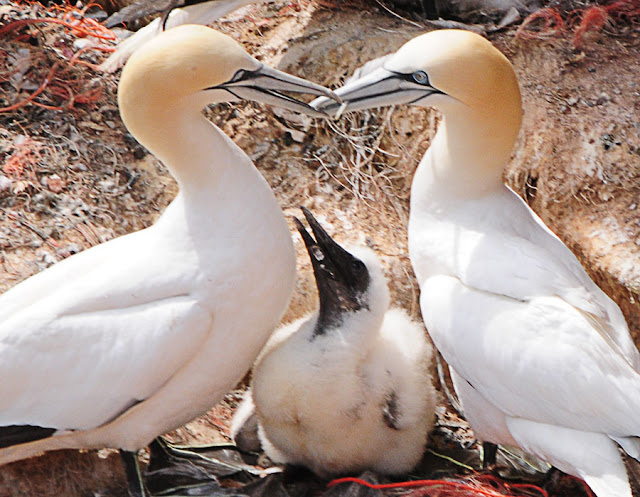 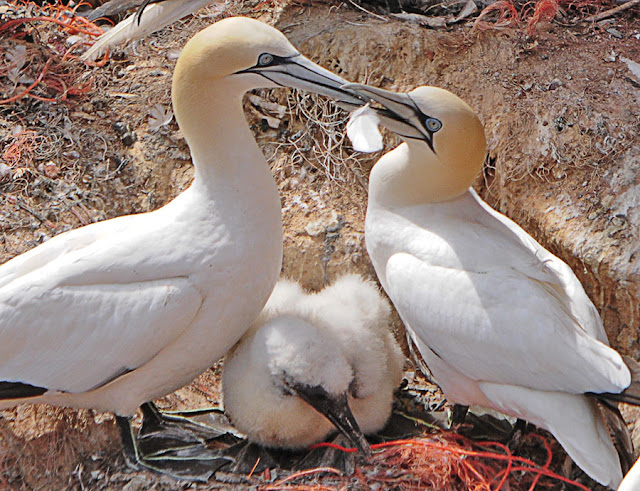 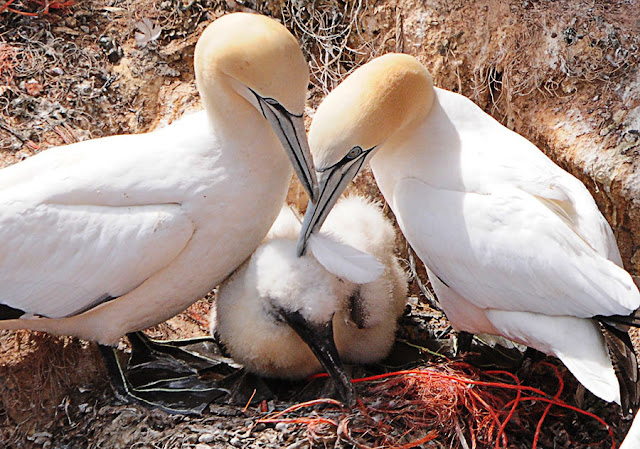 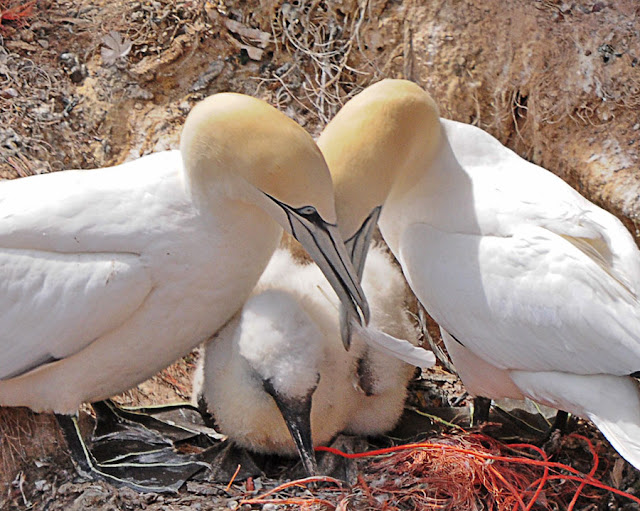 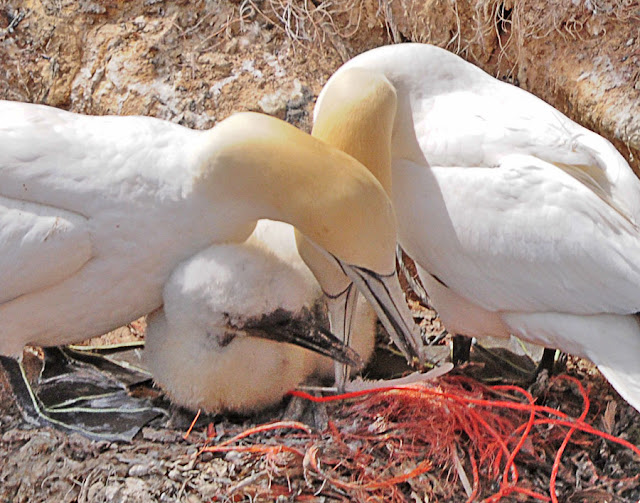 Closely examining the photos after I got home, I discovered the tragic consequences of the Gannets' method of nest construction. The rocks were covered with tons of man-made indestructible trash: plastic lines and pieces of nets that the Gannets had dragged up for nest material in place of their customary sticks and seaweeds, and that ended up trapping many of them, leading to their slow and agonizing deaths. 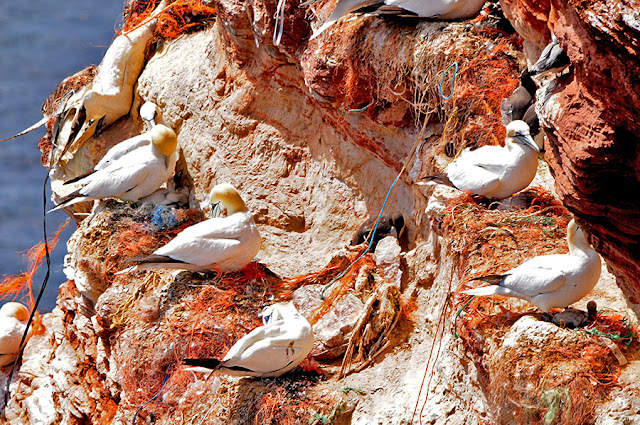 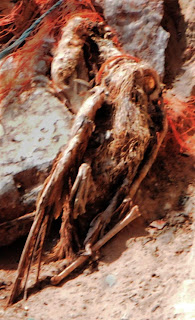 The living and the dead:  a recently dead adult bird in the left upper corner and the skeletal remains of one near center right among apparently oblivious  adults and chicks 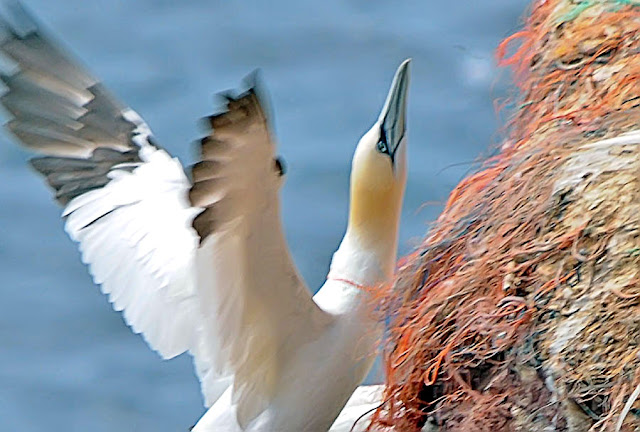 Is this adult going to be able to free itself from the sling around its neck? 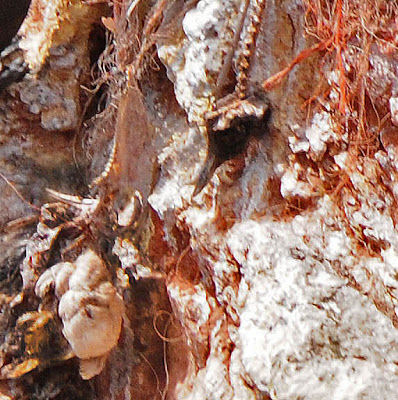 These juveniles didn't make it

Fortunately this  appears to be the only known Northern Gannet colony in the North Atlantic suffering such  calamity. The North Sea is a shallow shelf sea ideal for shrimping with drag nets over its bottom. Nets are lost or torn apart and remain floating in the water or washed up on the beach. Gannets are known to resort to beachcombing for their nest material. Or perhaps they grab it when the nets are  pulled in for mending. 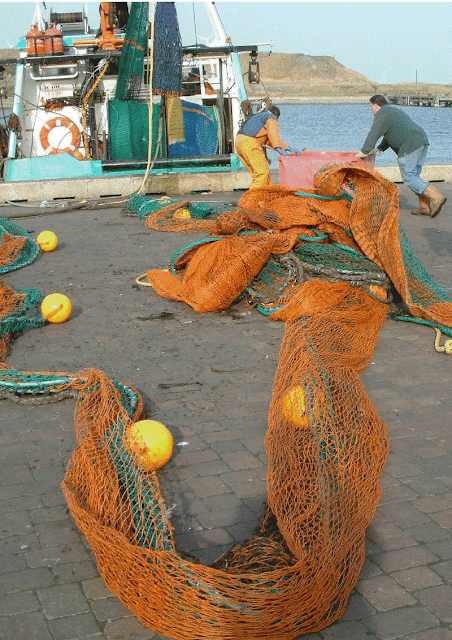 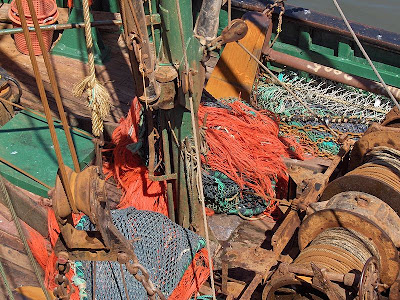 Part of a trawl head on top of the rock. How on earth did it get up there?

Until then I had been content to archive my photos on my website; but now I had to write about it, hoping to bring this debacle to the public's attention. That's how I started my blog.