The other day I was surprised to see a flock of about 20 American Robins feeding on the hairy red fruits of  the Staghorn Sumac that was growing behind our shopping center. Because the fruits are dry, have little flesh, no fat or sugar they are usually left untouched until late winter. In spring and summer we are used to seeing them foraging on the ground, running, then suddenly stopping to listen and pouncing to extract an earthworm. In the winter when the ground is frozen they switch to fruit on the ground or still hanging in the trees. 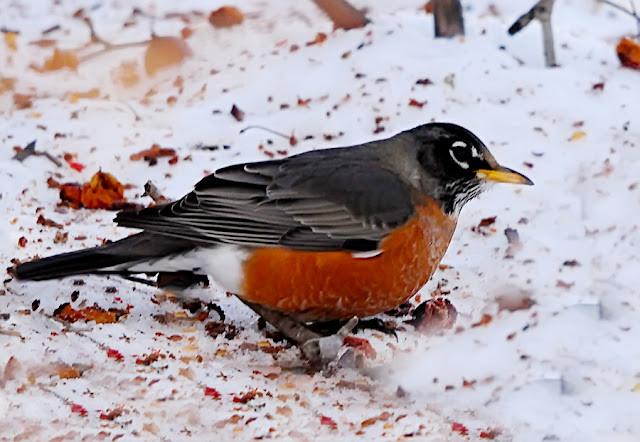 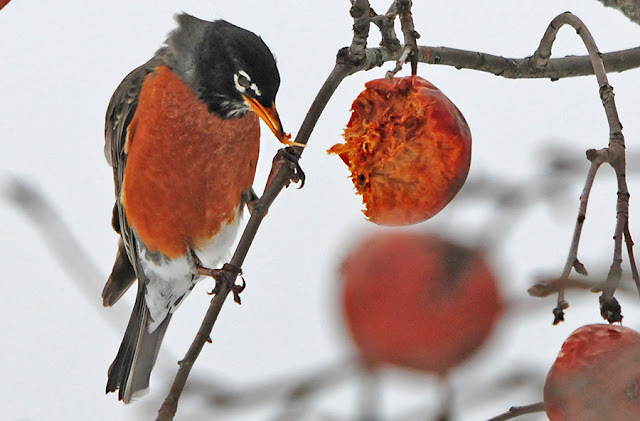 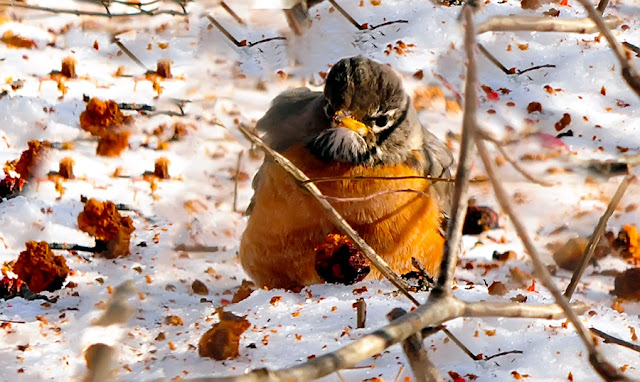 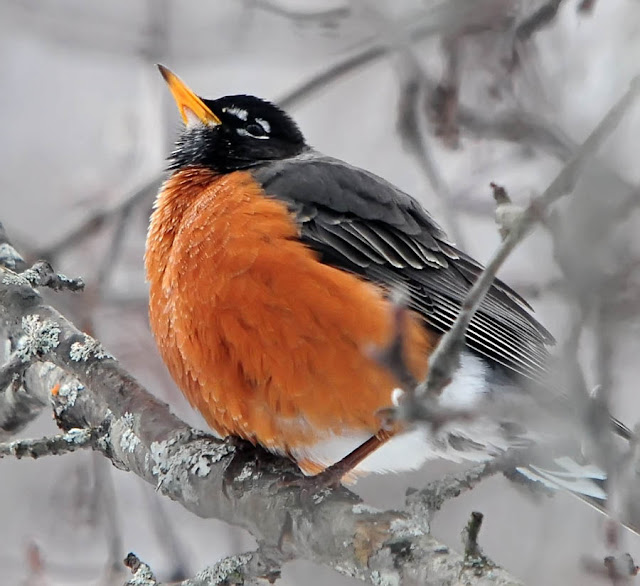 The Robins we see here in the winter probably probably started their fall  in Canada and found the Northeast temperate enough to stay through the winter, whereas those that summer with us have shifted southward. So these are probably the same Robins we see in early spring when the snow is receding,  in transient large flocks foraging among the old grasses and leaves in our backyards and fields.

Many birds that are solitary during the breeding season often flock together in winter, when food sources are rare and much more sporadic. Even through the bounty must be shared with a larger number it still pays off to have more eyes scouting for them.

Snow Buntings are highly territorial in the summer, jealously defending their nesting sites in the tundra, but during the winter they often travel in mixed flocks with Horned Larks. They are most easily found along plowed roadsides where they forage for grass seeds and grains. 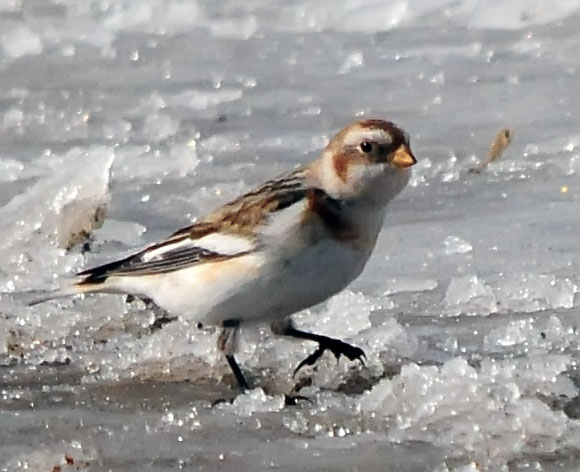 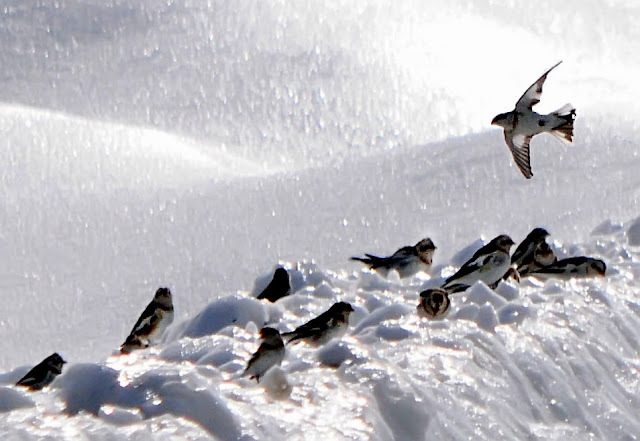 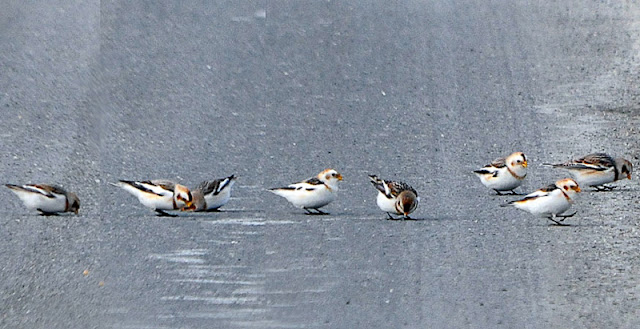 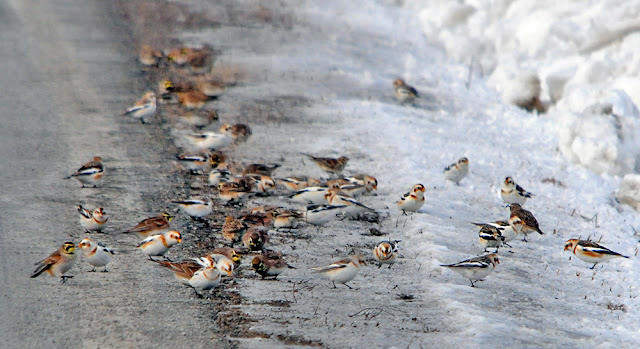 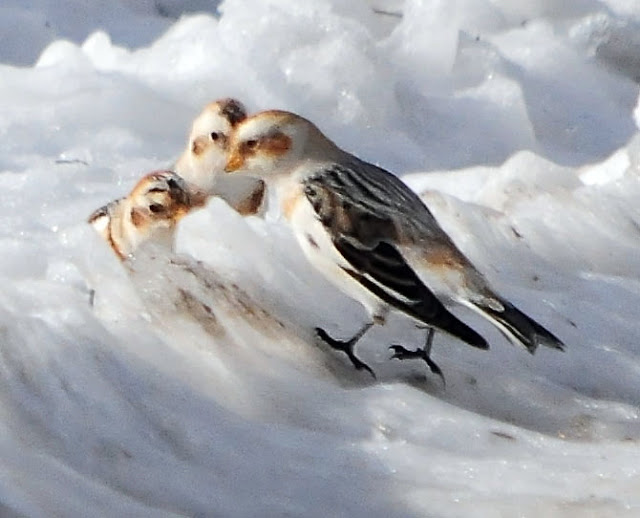 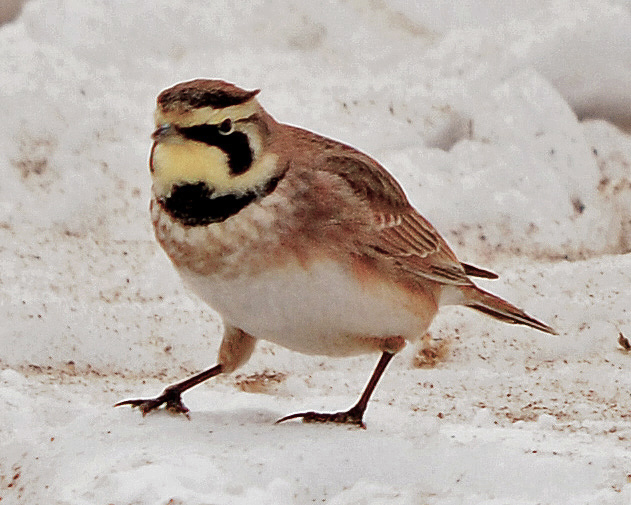 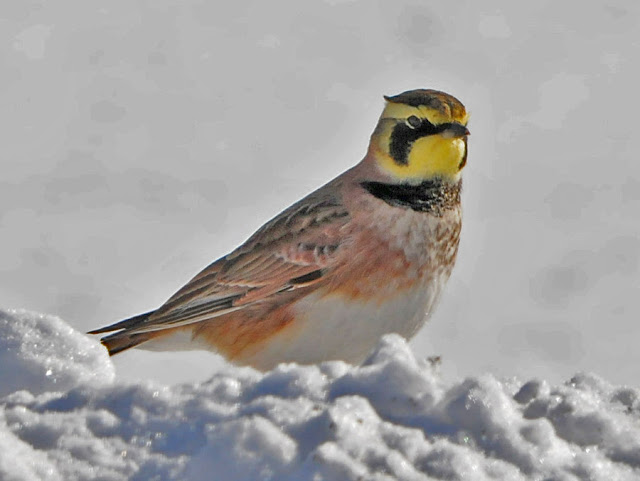 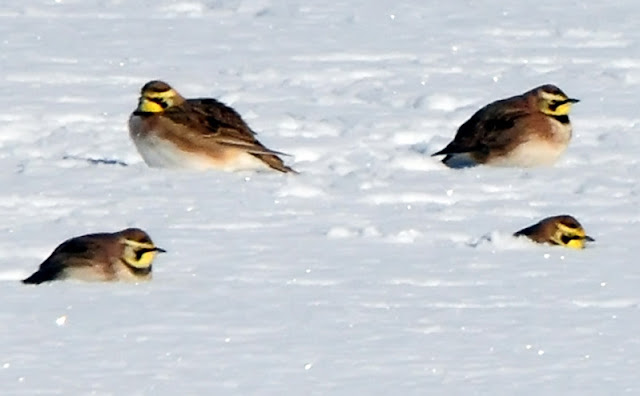 Both the Horned Larks and Snow Buntings roost in scrapes in the ground or burrow into the snow for extra protection against the cold. During a storm they may let themselves be snowed in. 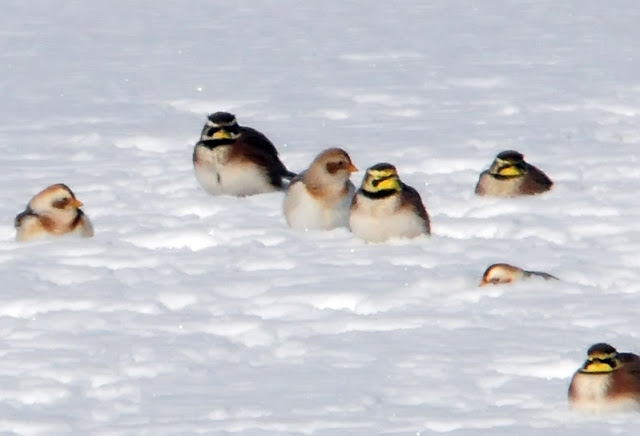 In the winter Northern Shrikes, like this first year juvenile, migrate south from their home in the tiga/tundra to southern Canada and the northern United States where prey may be more available.  Sitting high in a tall tree they look innocuous, watching and scouting for any small movement in the trees or on the ground, when they are down in a flash to grab a bird or small mammal, revealing their true nature and justifying their Latin name Lanius excubitor "Butcher Bird". 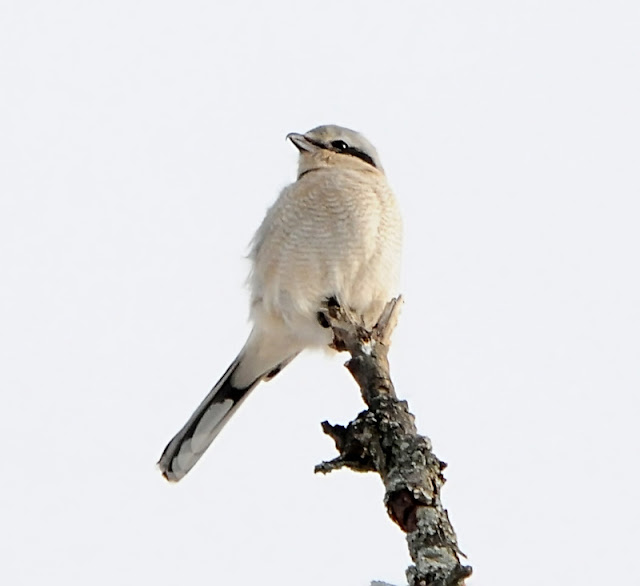 House Sparrow puffed up against the cold trying to keep warm. 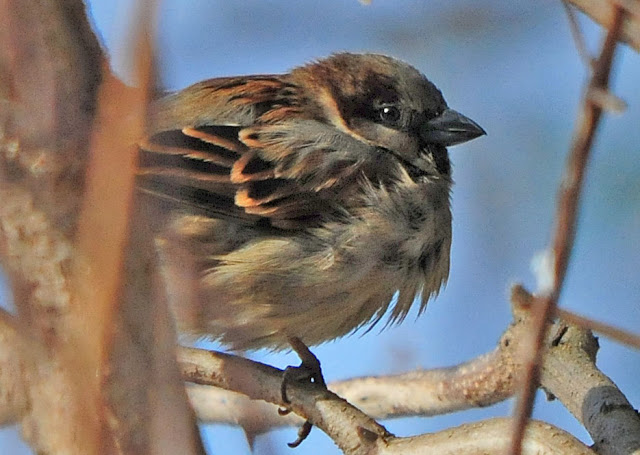 Bohemian Waxwings are true  nomads, roaming in flocks  and descending when finding berry or fruit bearing trees. They are voracious eaters and only leave when all the fruits have been consumed. They are so unpredictable that It's always a special thrill to see them. 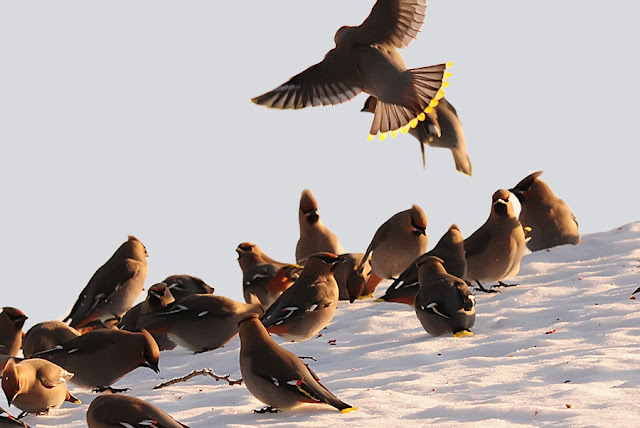 They cheer me up with their jaunty masks and feathered caps, the red wax tips on their wings and the red untertail coverts. Here they are feeding on fruit fallen off a crap apple tree. 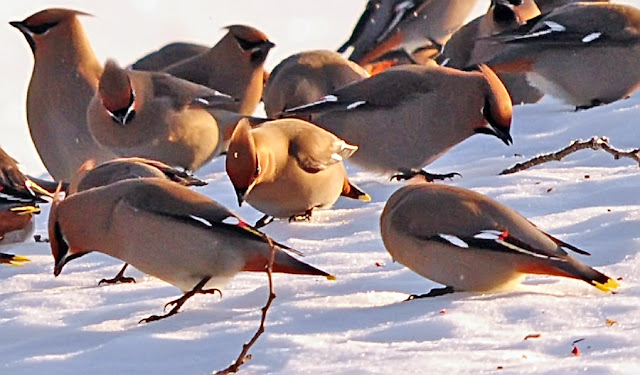 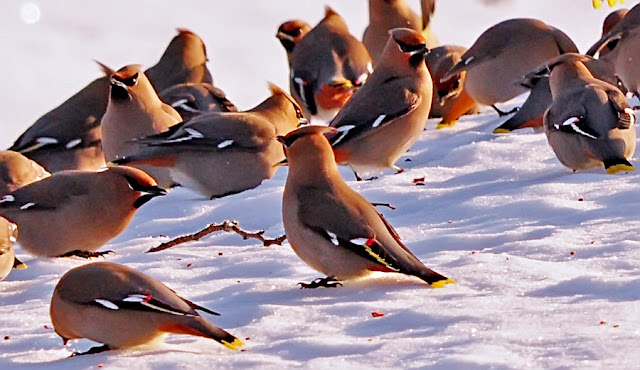 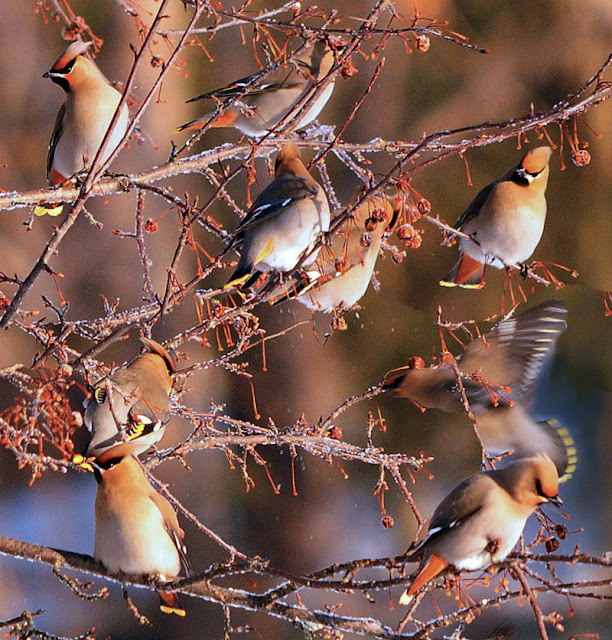 Their rakish looks make me smile. 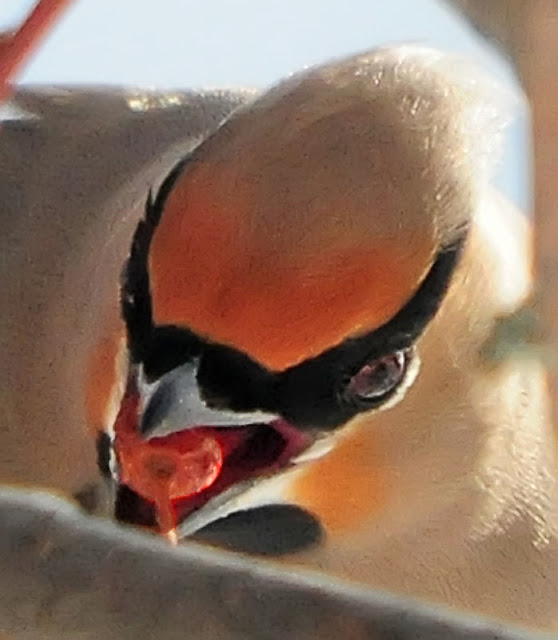 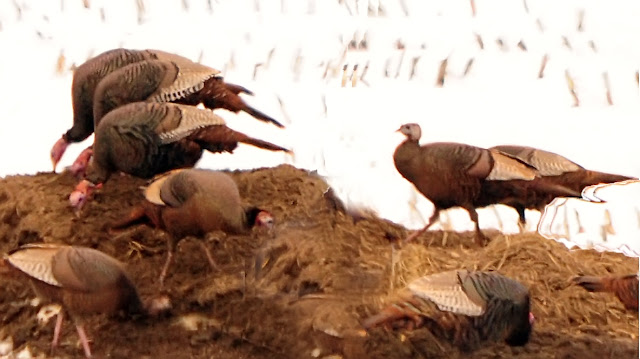 Homely looking Wild Turkeys foraging on a manure pile in a snowy field. 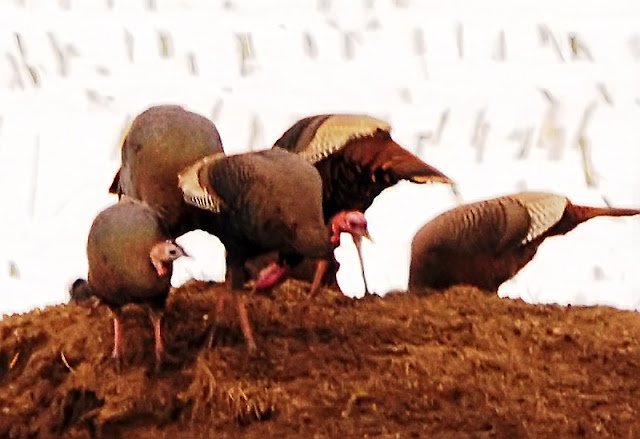 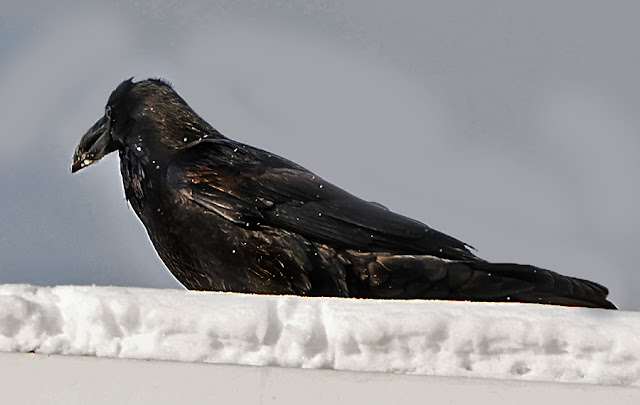 I first saw this Common Raven on the flat roof of parking garage. It then flew across the parking lot and landed on a  mound of snow at the edge of the lot where I followed it in my car. I was able to take a couple more photos before it flew off heading east into the morning sky. 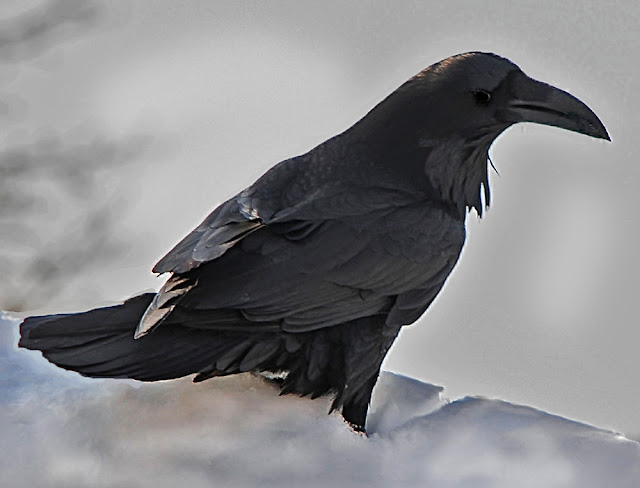 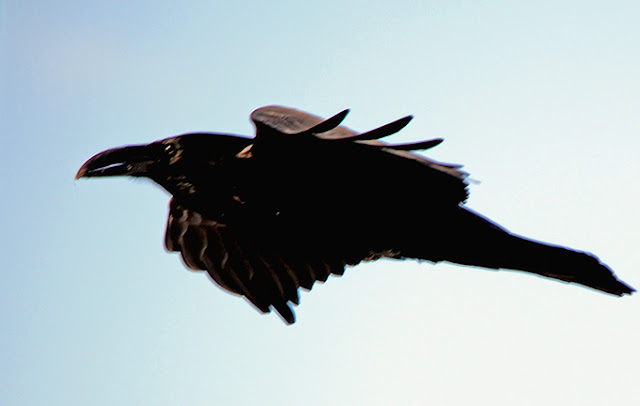