Where are the Bobolinks?

The first time I saw Bobolinks was about 30 years ago, when I was just a casual birdwatcher. I was taking my mother, who was visiting from Germany, on a tour of the mountain state that had become my home. We stopped at the Trapp Family Lodge in Stowe, VT, for  lunch, but did a look around first. It was a glorious day in mid June. There were several large hayfields on the slopes around the lodge and on them a burbling joyful cacophony, made visual by the spectrogram below, of black and white birds swirling over the fields and riding the fences. Emily Dickenson calls the Bobolink the Sorcerer of the Meadow in her poem "The Way to know the Bobolink"  :

"The Way to know the Bobolink
From every other Bird
Precisely as the Joy of him—
Obliged to be inferred.
..........

"Extrinsic to Attention
Too intimate with Joy—He compliments existenceUntil allured away
......... 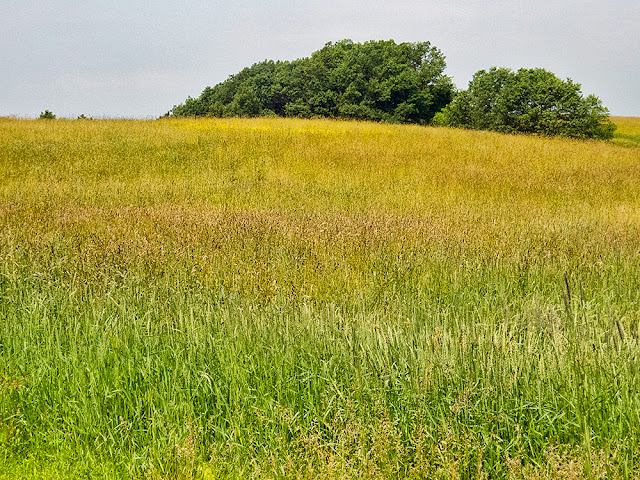 Bobolinks are iconic  grassland  birds of the northeast and center of the country. The males are easily recognized by their  buffy napes, black front and on their backs white shoulder patches and white on their rumps.  Many meadows may look empty at first glance  but watchful waiting and listening is often rewarded. 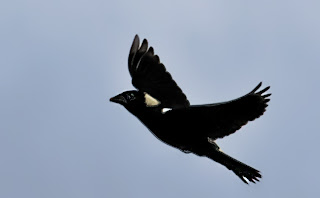 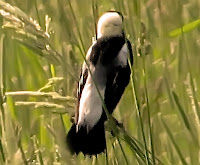 They are semi-colonial and need at least 20 acres for a breeding. They prefer wide open grasslands, old hayfields with a mix of grass and broad-leaved forbs. They tend to cluster in the middle of a field away from  woody edges. The female builds her nest on her own in a small hollow in the ground weaving old grass and fine sedge together into a thin cup at the foot of a broad-leaved plant which provides shade and leafy shelter. Both she and the male are polygamous Her hatchlings are often fathered by different males. The males have a primary female who gets most of their attention, but they may also breed with, and provide for, other females. The males are generally not territorial, except during courtship, and often flock and sing together. 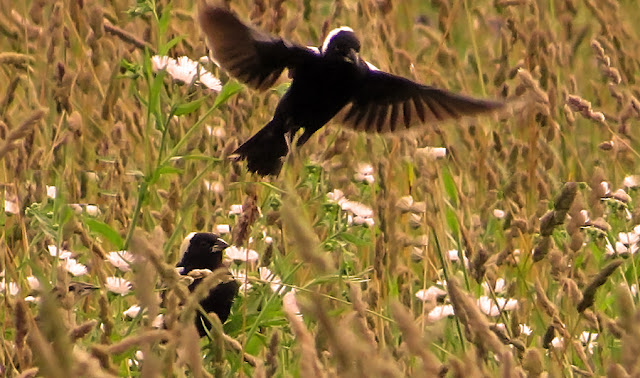 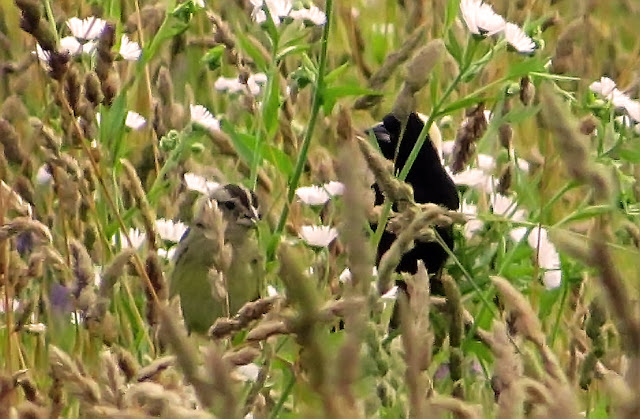 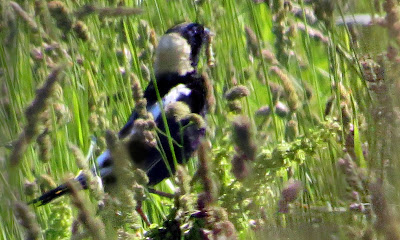 These were the only two Bobolinks I saw carrying food during several field trips this year. 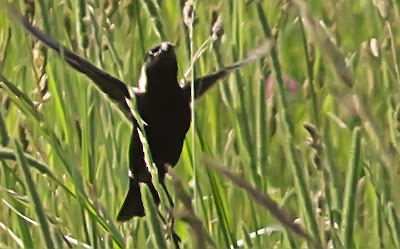 The relentless torrential rain this spring and early summer must have flooded many, if not most, nests and drowned eggs and nestlings. I haven't yet seen any juveniles. Unless they are successful in re-nesting before the meadows are mowed the outlook for any first-year nestlings returning next year is not good. Unlike other songbirds many Bobolink yearlings return to the site where they were originally hatched according to banding studies done by Noah Perlut as recounted in this lively Burglinton FreePress article and video.

Below are a series of photos of male Bobolinks on their perches, blades of grass, on which they often do their singing and calling. 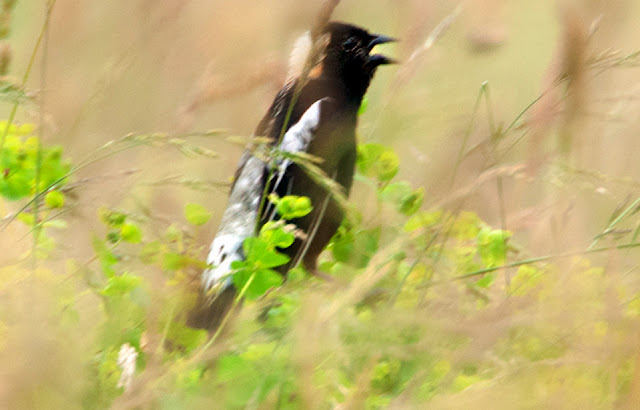 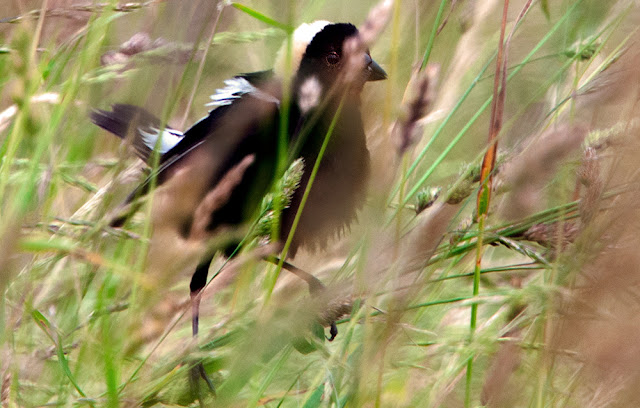 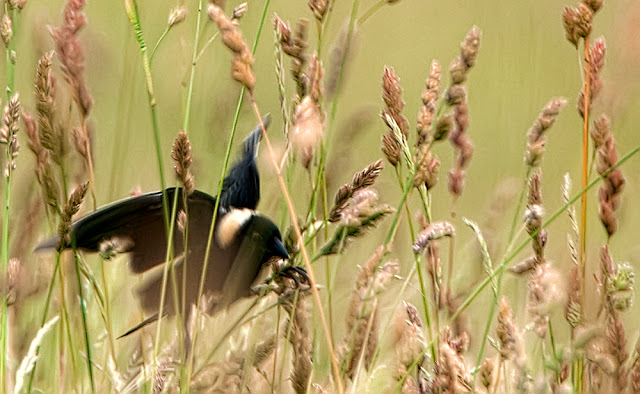 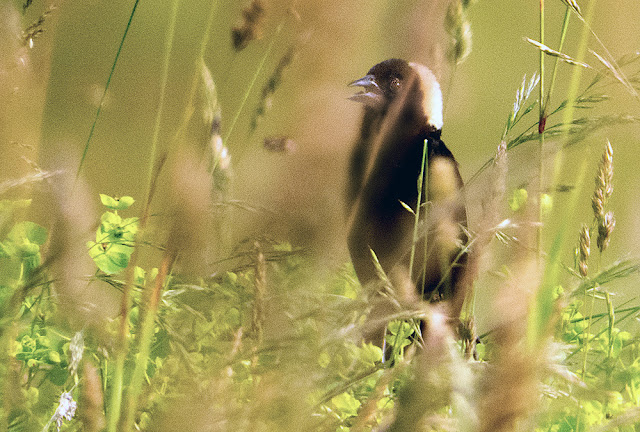 Mid-season June mowing will destroy nests and nestlings. To give late nesters and re-nesters a chance mowing is best delay until August. Here's a link to NY Audubon management recommendations. By October most birds have left for their wintering ground south of the Equator, the Argentine pampas. 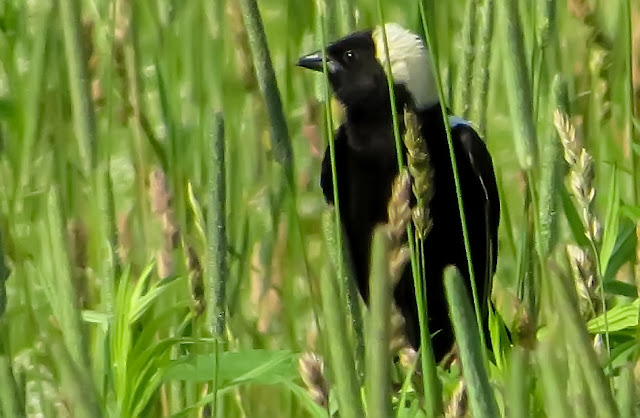 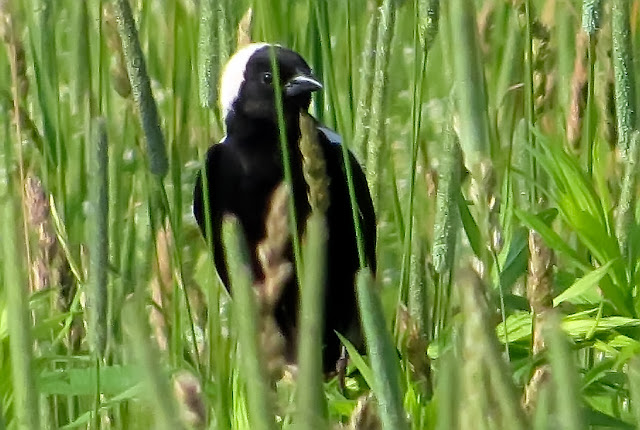 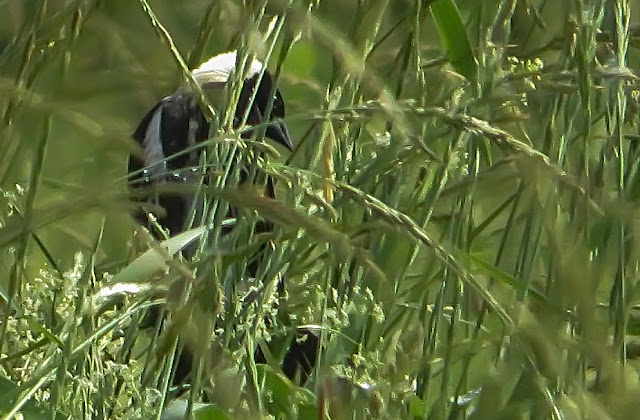 A couple of weeks ago I sent out an email on the VTBird listserve with title "Where are the Bobolinks?" because they seemed to be absent in the areas where I had seen them before in sizable numbers. For example I took these shots of a feeding pair on a meadow just up from my house in 2008. but I haven't seen any on there for the last several years. 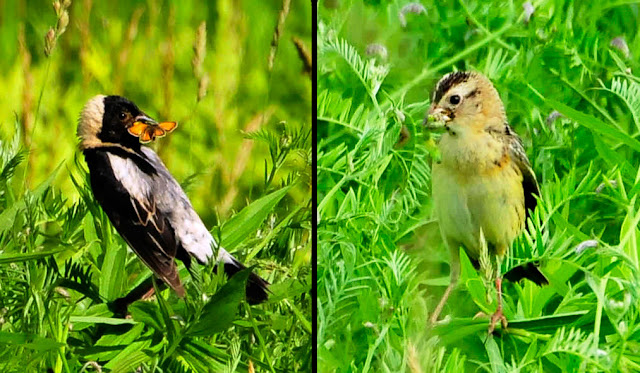 But judging by the response to my message Bobolinks are widespread and locally common most everywhere. However according to the Atlas of Breeding Birds in Vermont there has been a rather significant decline of one to two percent annually in Vermont and neighboring states. In some parts of the continent, especially in Ontario, CA, the decline has been dramatic: 88% since 1970 and it's continuing unabated. Studies by the Canadian Wildlife Service with help of researchers from the Vermont Center for Eco Studies are underway to figure out why this is happening. Bobolink survival is threatened on multiple fronts:  habitat loss from development, conversion of hayfields to crop plants, nest destruction due to more frequent mowing, and reforestation.  For anyone looking for more information there is an excellent NY Audubon Guidance for Conservation pamphlet with specific management recommendations.

Post Script:  An upbeat note from ornithologist Noah Perlut --who by the way also authored the Bobolink article in the Atlas of Breeding Birds in Vermont that I mentioned above--
“A mowing program has been developed for intensive dairy farmers in VT.  At last count, >1300 acres were enrolled--and it has major (positive) benefits for bobolinks.There is also a new grazing program this year based on our research that is specifically aimed at increasing habitat for bobolinks, Savannah sparrows and meadowlarks.”

Please note: I am reducing my posting to the 6th of every month. My post will appear on Birding is Fun. Head over there now for the site's daily wonderful posts!