A couple of weeks ago on a beautiful warm day I drove to Salisbury Beach State Park at the mouth of the Merrimac River to see the Crossbills that had been reported there. The pines on the park's camp ground were studded with thick round cones that were bursting with seeds. I watched as flocks of Crossbills were flying short distances from tree to tree.

Most of them were White-winged Crossbills. Red Crossbills were present in much smaller numbers. They are recognizable by their brick-red color with white only  on their undertail coverts. The color on the White-winged Crossbills is more purple, as if dipped in red wine, very similar to the Purple Finch's.  However it was easy to mistake one for the other if you just saw them from the front and didn't see their wings. They are messy eaters; many of them were feeding on the ground picking up dropped seeds. The "cross bills" refers to the peculiar shape of their bills which are well suited for wedging open the thick cone scales to extract the seeds.

The following photos all show White-winged Crossbills, the flashy males as well as the more subtly colored olive and gray females. The paler pinkish birds are immature males. 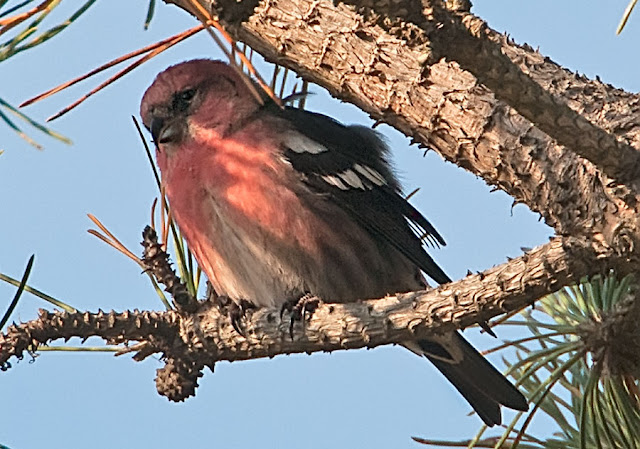 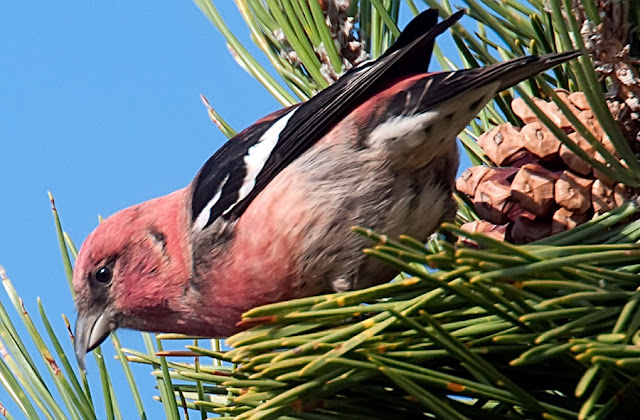 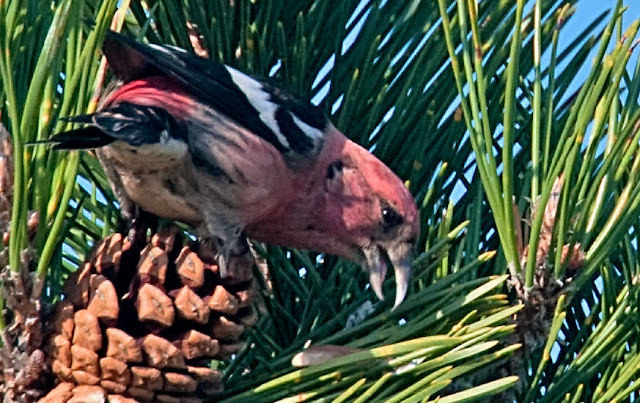 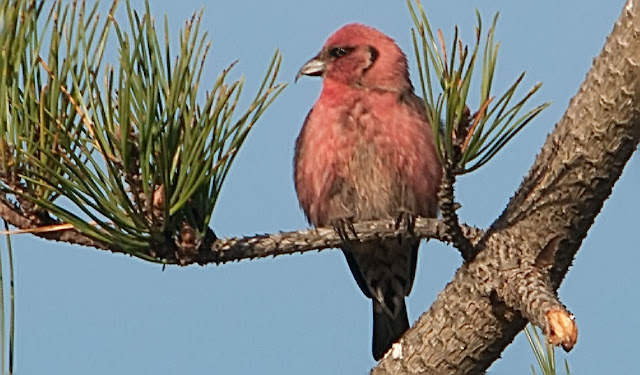 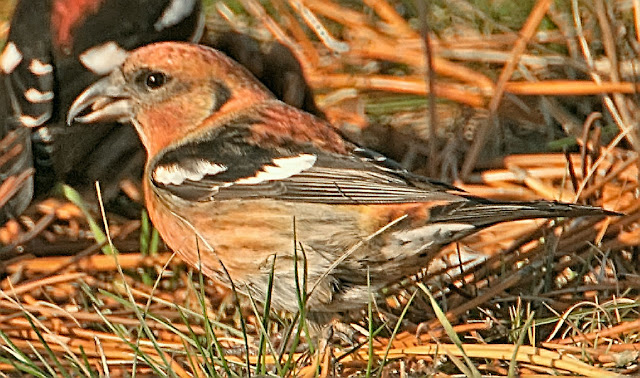 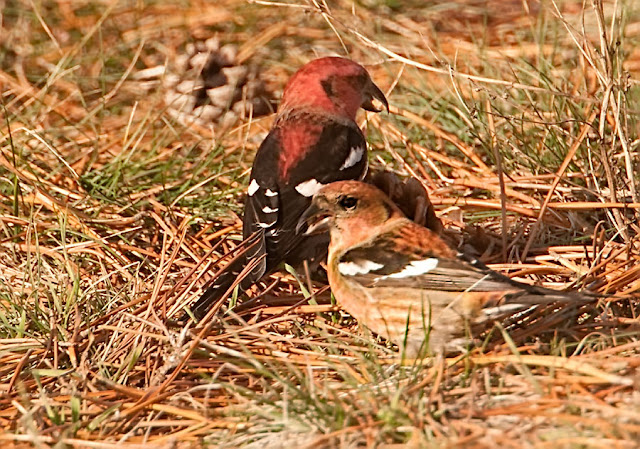 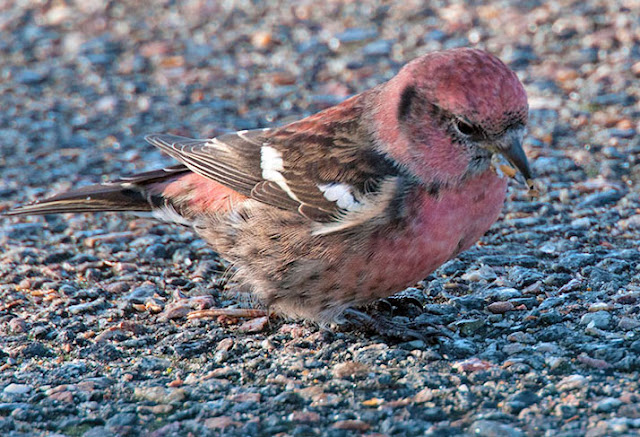 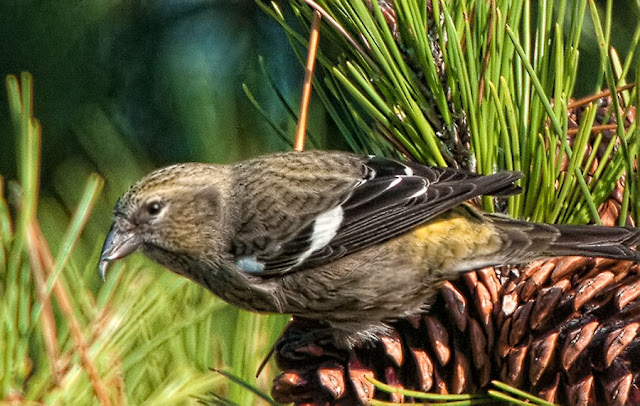 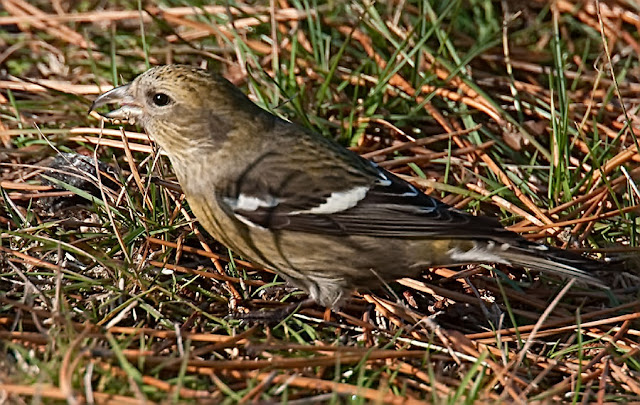 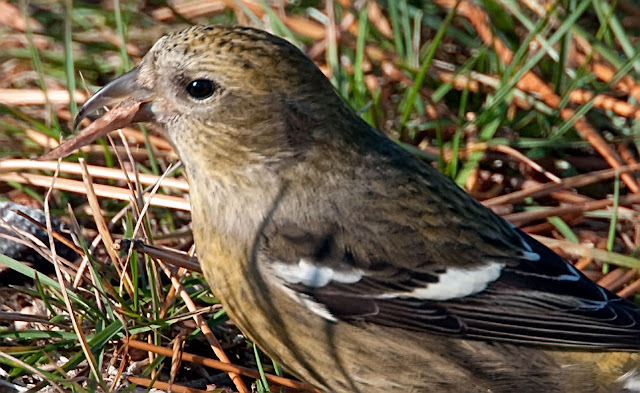 I got only a few photos of the Red Crossbills, all males. 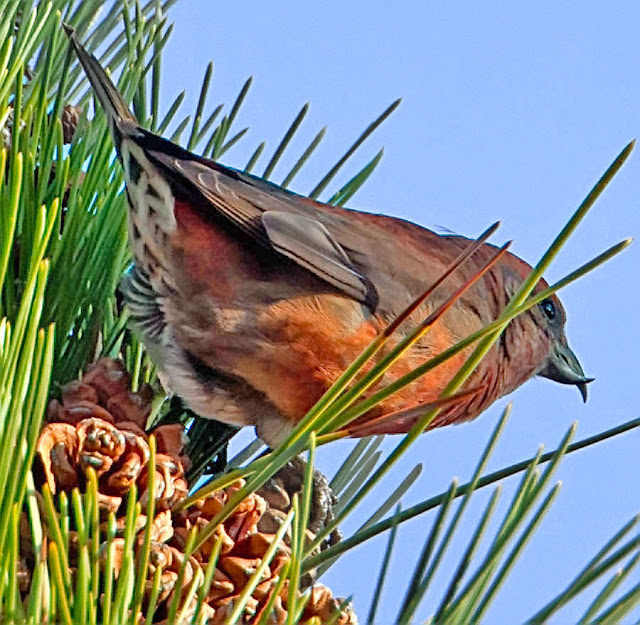 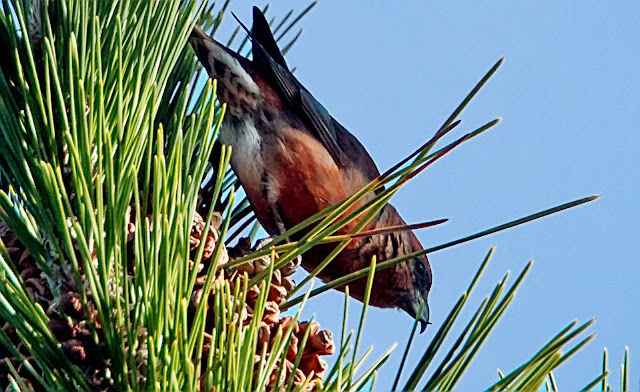 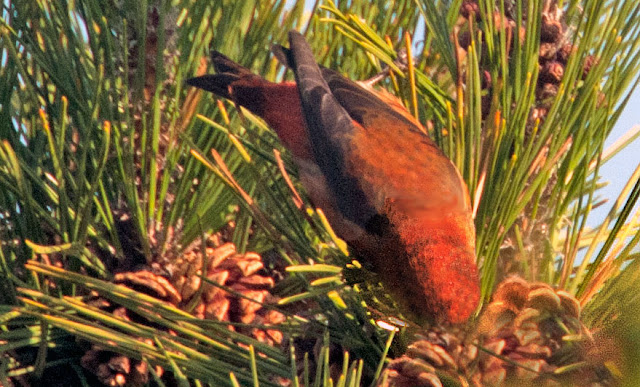 The crossbills are included in this year's report on the winter finch irruption. For a very informative updated report see Tim Schreckengost's post on Thermal Birding.

-- and thank you for visiting my blog. I am also thankful for all the wonderful birds I was able to see this year. I hope everyone will participate in their area's Christmas Bird Count. We owe it to the birds!

One of the world's great migrations: neotropical warblers and other songbirds

We may have seen pictures of huge herds of caribou migrating or wildebeest fording a crocodile-infested river on the Serengeti plain, but few people are aware of the hundreds of thousands of migrating song birds passing overhead as we sleep, birds that spend two thirds of their lives in the neotropics, in Central or South America.   On quiet nights if you have good ears you may hear the faint high-pitched sounds of the passing birds. Turning recordings into spectrograms may help with individual identification; yet almost nothing is known about the character and composition of these flocks.

Most migrants stop in the morning to feed and rest and then resume their journey at dusk. It's a perilous journey with many obstacles. Most song birds live about two years with about 85% of the mortality occurring during migration. For example the tall glass towers in Toronto form a lethal barrier for birds coming south across Lake Ontario from the northern wilderness.

The multitudes of migrating birds are most easily seen on weather radar. The Wordpress Badbirdz Reloaded site provides a good primer. There are several ornithologists that chart the nightly migration progress on their blogs. Drew Weber of Nemesis Bird is one of them.

In New England by October most of the warblers have left, but there are still a few stragglers. The highlight of my recent walk was seeing an Orange-crowned Warbler, a life bird for me. Among the sparrows skulking through the underbrush I glimpsed a small bird with a delicate beak. Pishing brought it to the surface. 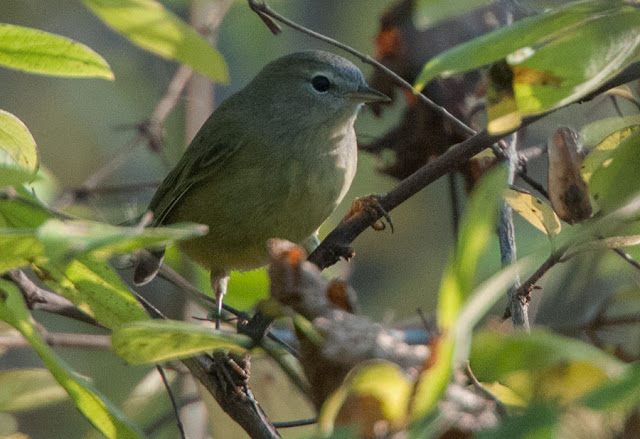 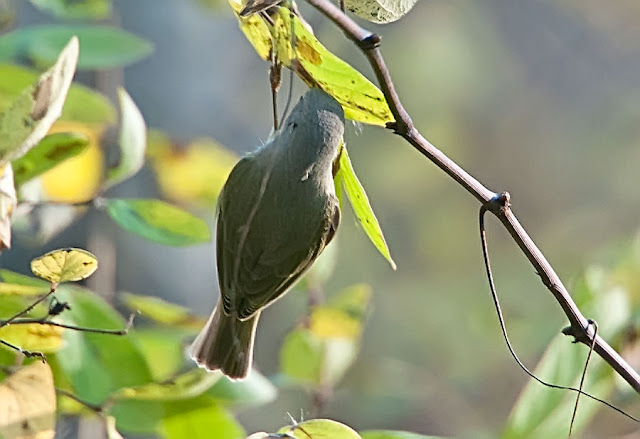 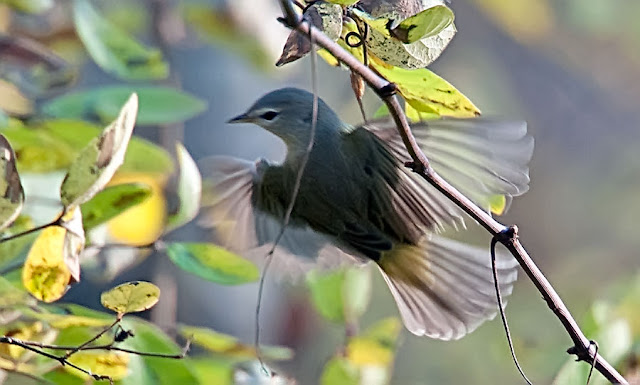 The name is really a misnomer. The orange on its crown is almost invisible except in a certain light. 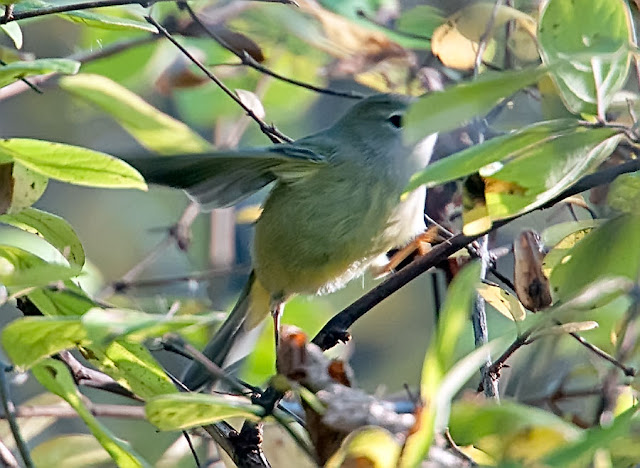 It's a late migrant that may stay into November and may even turn up during a Christmas Bird Count.

The Palm Warbler is another such species that is still around in NE. I took these photos in early October on the West River Trail: 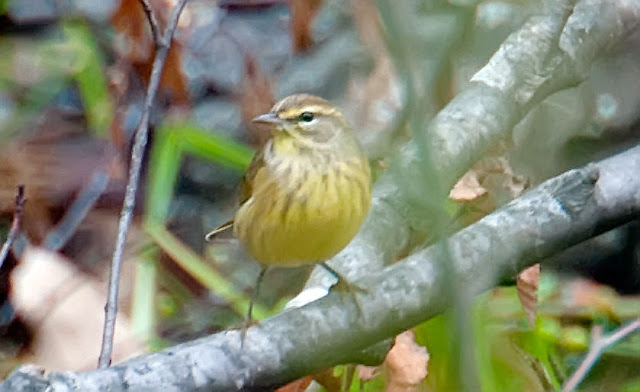 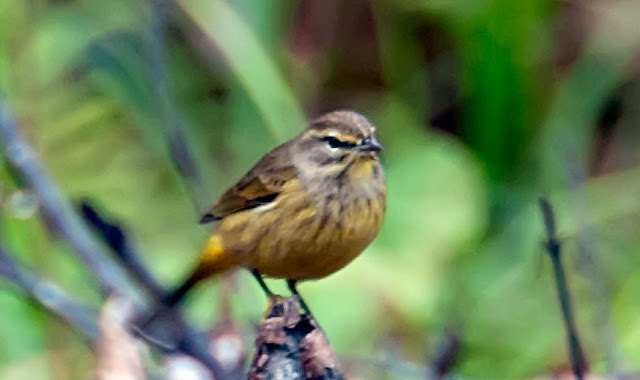 On the same day I found a female Blackpoll Warbler, a species usually found in the higher altitude of the White Mountains - see previous post. 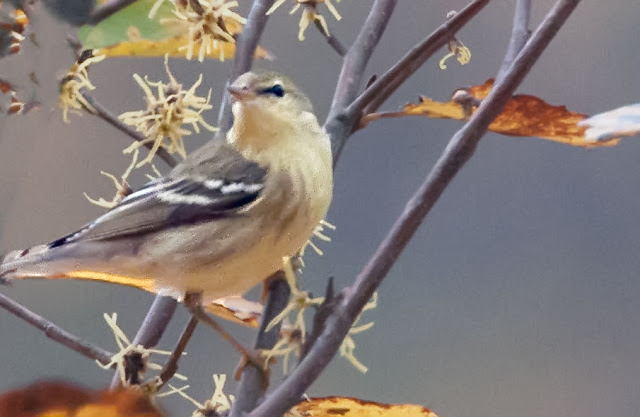 Blackpoll Warbler undertake the longest migration of any warbler according to BNA online.  Their route takes them south across the Atlantic Ocean, a route that averages 3,000 km and may necessitate a nonstop flight of 88 hours.

One of the most common warblers in the Northeast, the Yellow-rumped Warbler often stays into November: 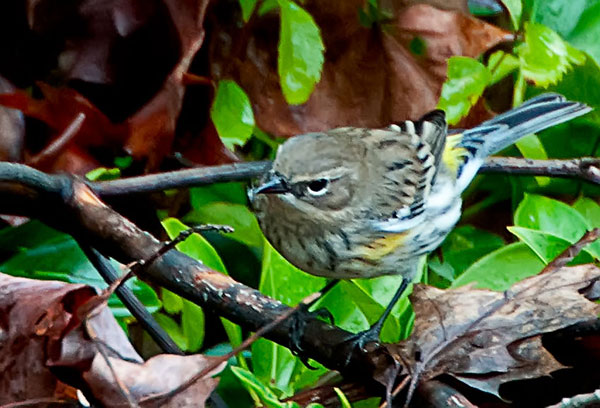 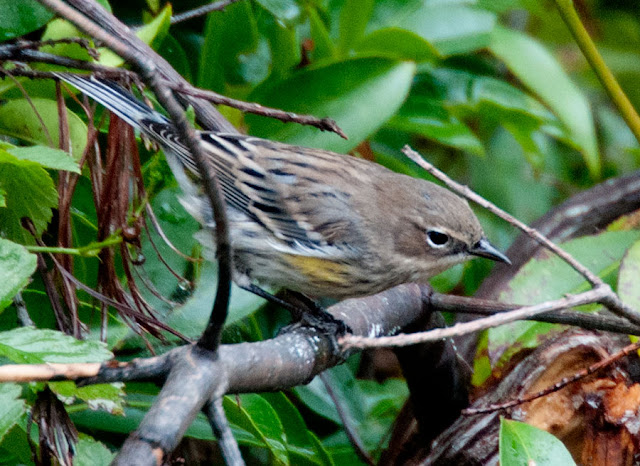 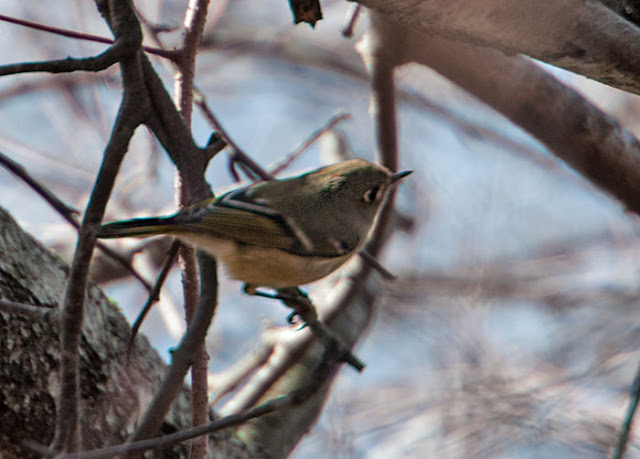 The Ruby-crowned Kinglet is another late migrant


When substantial numbers interrupt their migration because of unfavorable weather, we have a fallout, an event much appreciated by birders  Last year we had both a spring and a fall fallout of Palm Warbler. Here, In the fall, they settled in a harvested cornfield for a day. 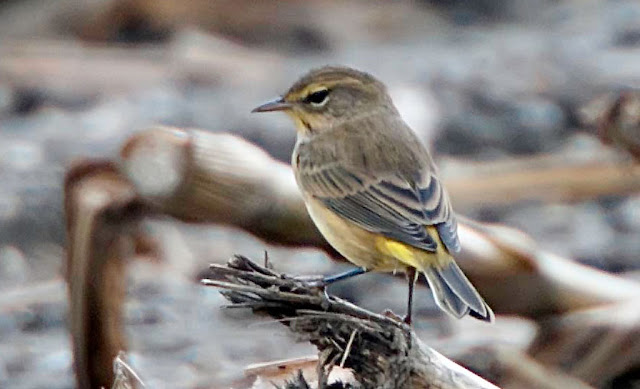 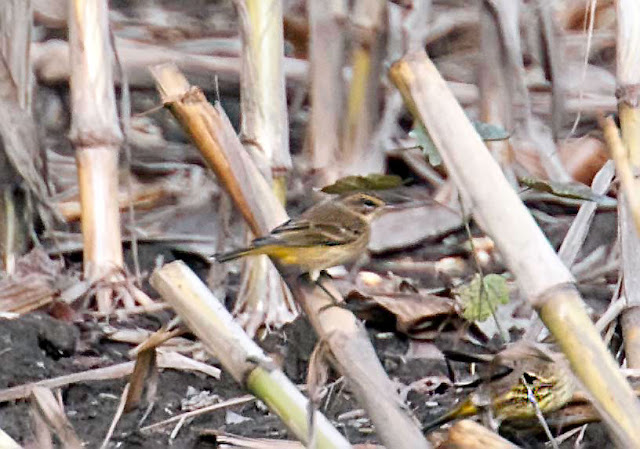 Sometimes a bird gets blown off course. This happened two years ago in November when a Townsend's Warbler, a western species, showed up in a road-side weed patch in SE NH staying there for more than a week. Eventually it left. Its ultimate fate is unknown. 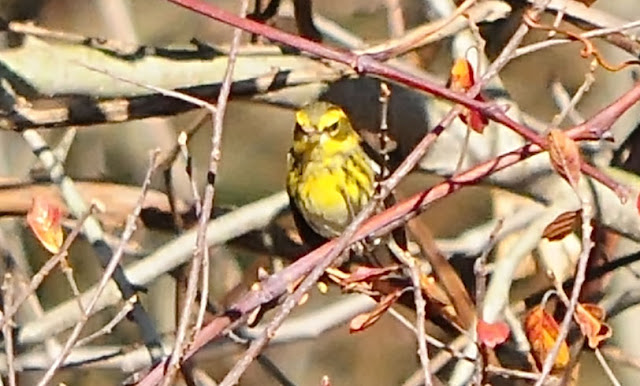 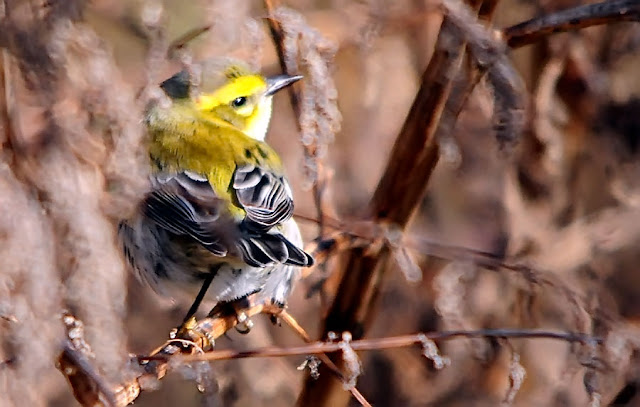 It's ironic that these lost vagrants, most of them unlikely to survive, provide the greatest thrill and attract birders from great distances.


If you like to read more about bird migration here are two remarkable books:


Living on the Wind: Across the Hemisphere with Migratory Birds by Scott Weidensaul