Juncos around my feeder

It's foggy damp and winter-gray outside my window early this morning. Our resident flock of juncos has congregated around the feeder which I just filled. It was a tufted titmouse with its harsh "beepbeepbeep" that had called my attention to the empty feeder as I was having breakfast - so breakfast had to wait.

Aren't there small buds on the forsythe shoots - and doesn't the light yellow/green color hint of spring? 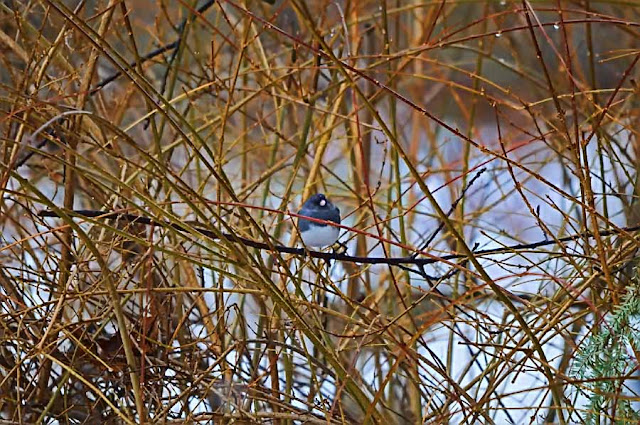 Pete Dunne in his book "Essential Field Guide Companion" describes the juncos has having an angry, almost sullen expression, if you look closely. I can't agree. Maybe they were just hungry. 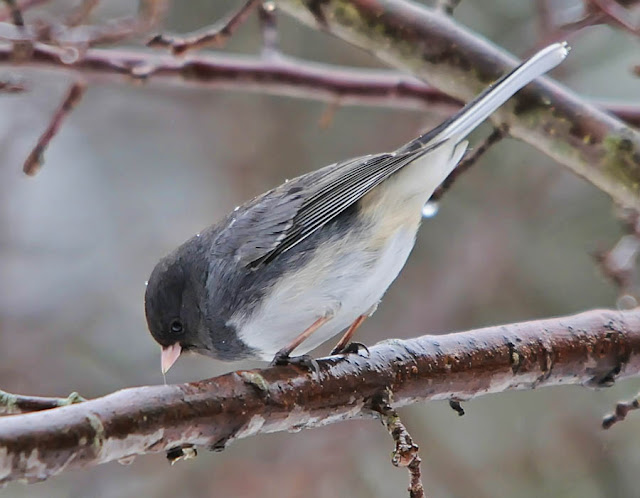 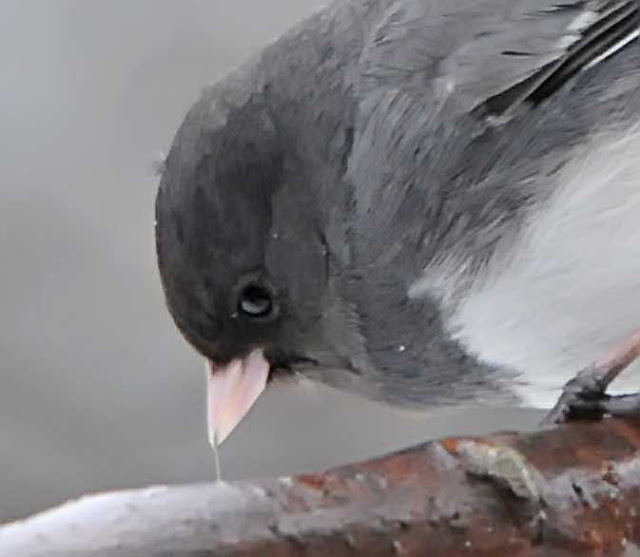 This one just filled its stomach and looks pretty content to me: 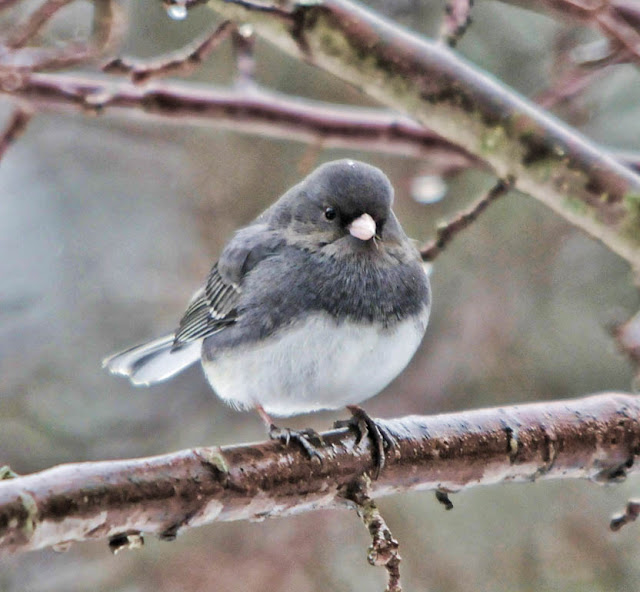 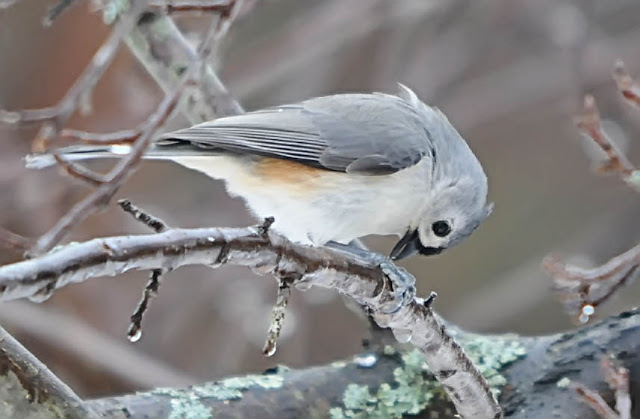 This Tufted Titmouse drilling down on a sunflower seed.

It looks like the sun will be coming out now. The sky shows patches of blue and the snow is turning from gray to  bluish white. Time to start the day's work....

Yesterday with the temperature nominally in the low thirties Chris Petrak and I took off for the coast hoping to see a good selection of sea ducks and other coastal winter species. We arrived in a deep freeze; with the wind chill factor the temperature was closer to 10 degrees. The tide had just gone out carrying with it many of the birds that we were hoping to see, but despite the cold and the paucity of birds we had a great day. 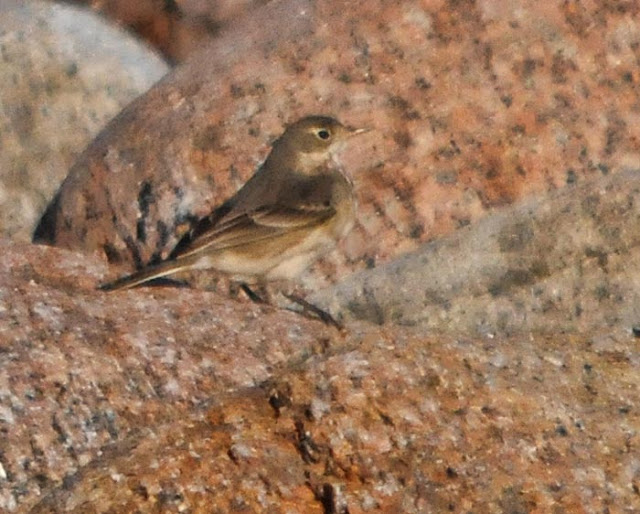 At Eastern Point near the Lighthouse in Gloucester we saw this American Pipit, which had been reported there, foraging among the rocks.

Heading north we saw small flocks of Red-breasted Mergansers, Common Goldeneyes, and Buffleheads. There were also countless Common Eiders, both juveniles and adults, but not the King Eider that we had wanted to see. 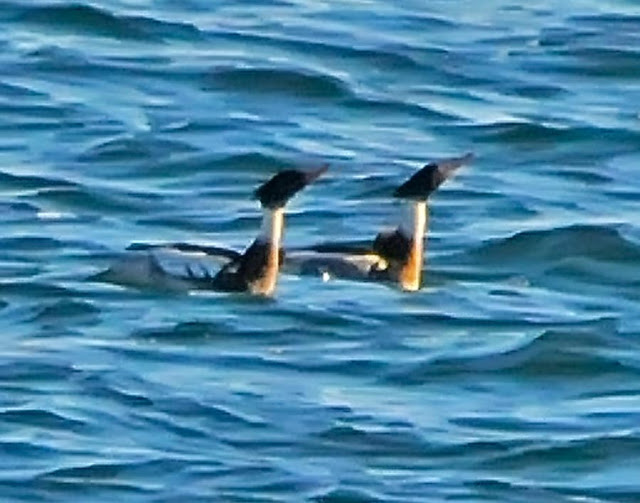 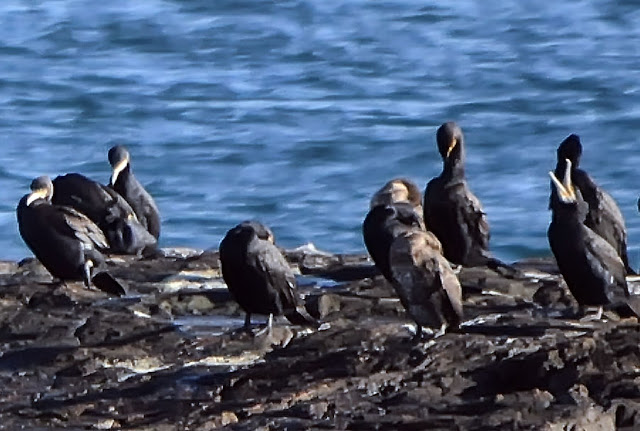 A large flock of Great Cormorants resting, sleeping or preening on a large rock in the bay.

This White-winged Scoter further out at sea was just at the limit of my telephoto lens' resolution. I had to do quite a bit of post-prosessing to get a recognizable image. 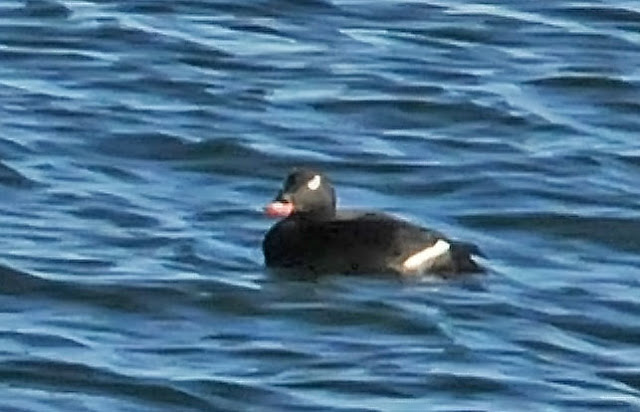 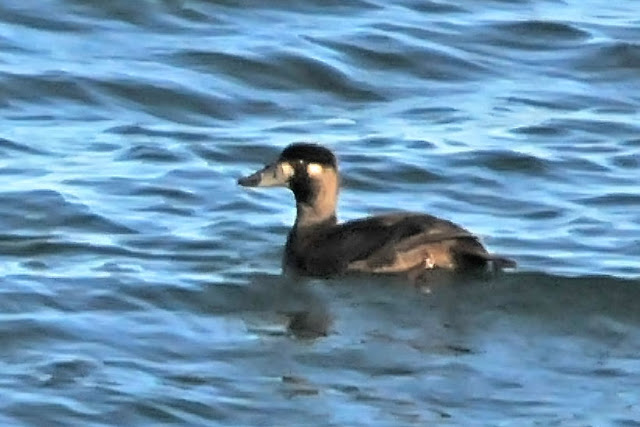 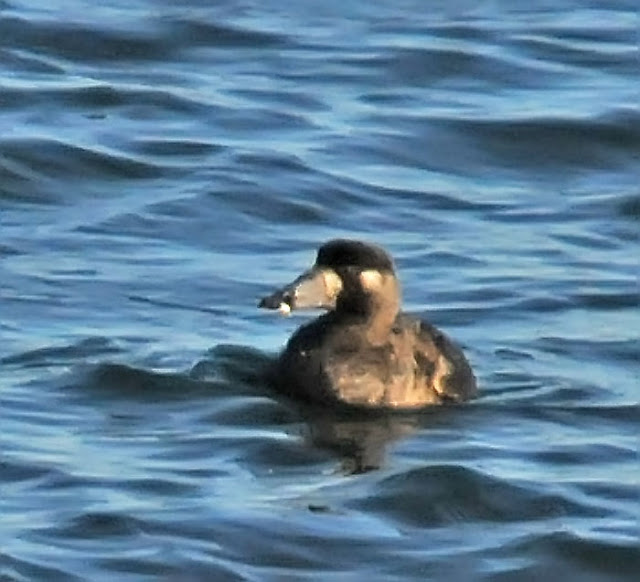 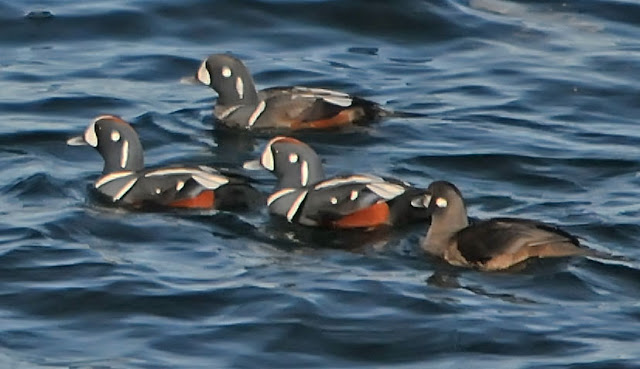 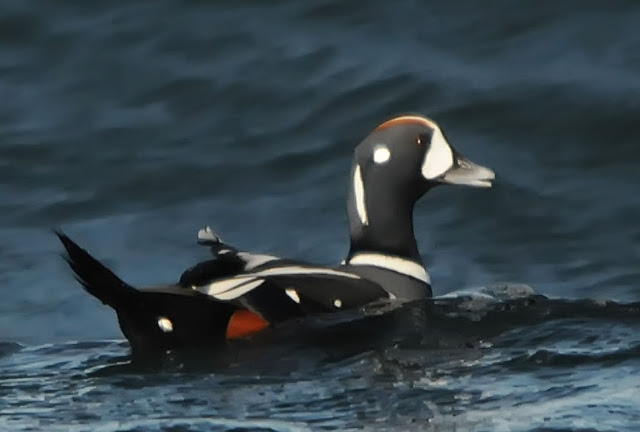 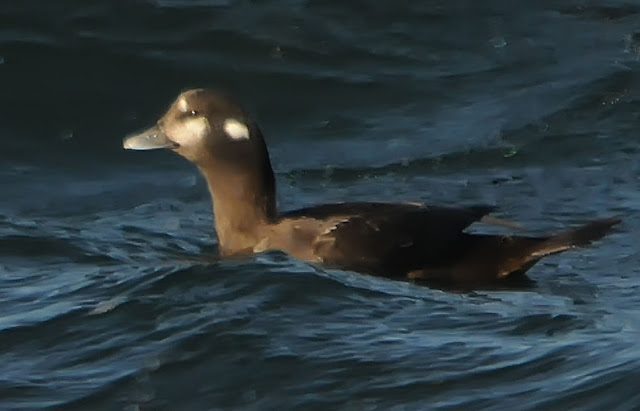 Skipping lunch we drove on to Plum Island to look for raptors and the Snowy Owl that had been reported there. However a wasteland of broken up ice all along the bay side of the peninsula made looking for the owl impossible. The stop there was not quite for nothing though: a Northern Harrier was winging it low over the trees showing off his white rump patch.

On to Salisbury Beach State Reservation, and the high point of our trip: when we arrived at the park near the boat launch a flock of about 40 to 50 Snow Buntings flew over us,  filling the air with their sweet warble. They settled on the ground some distance away but lifted up again as we tried to approach them. They did this several times and finally flew off. We got close enough though to get some photos. 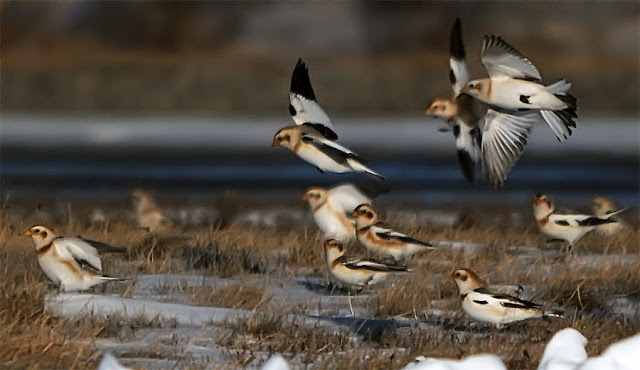 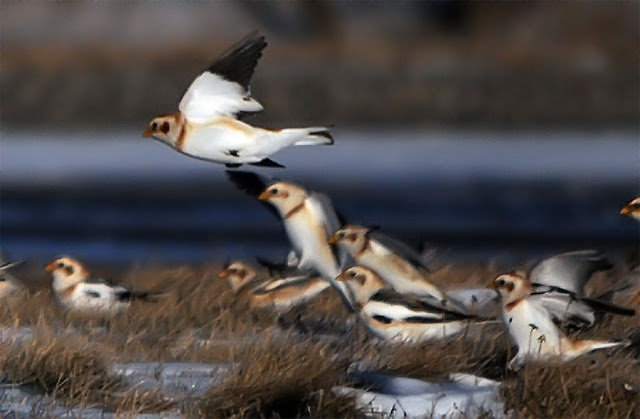 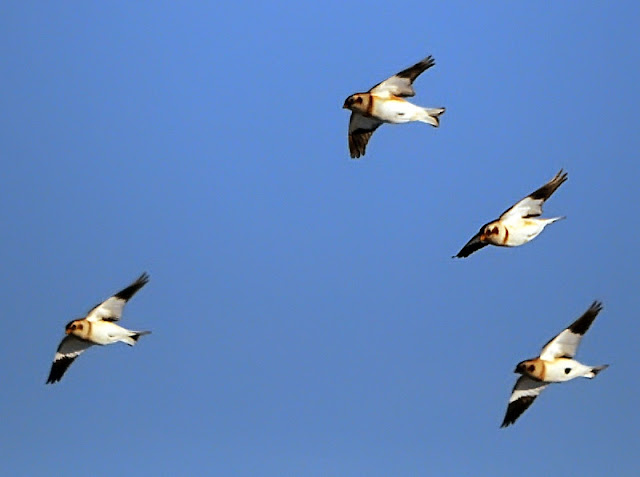 Lastly there were gulls aplenty, mostly ring-bills.This third-winter Herring Gull caught a nice fat crab --- It did better than us though as there was just too much to see to take the time to stop for a meal. 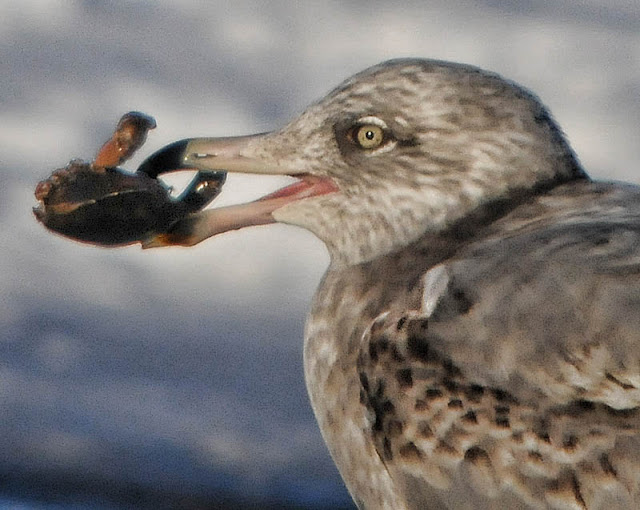 Well chilled through and through we finally called it a day 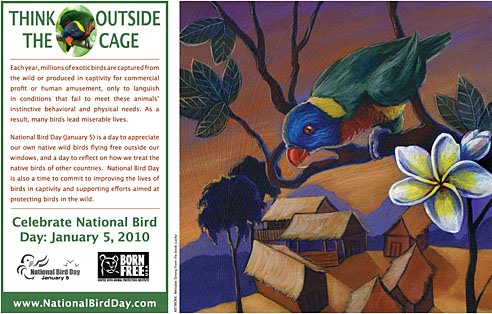 National Bird Day calls attention to the exploitation by the pet trade of birds captured in the wild and thereby endangering the survival of that species.

Posted by Hilke Breder at 9:19 AM No comments:

Juvenile Yellow-bellied Sapsucker at my feeder

There are always several downies and hairies around my crab apple tree and suet feeder. A couple of days ago and again today an usual visitor came around, a juvenile Yellow-bellied Sapsucker, rare for this time of the year. On both occasions it didn't stay for very long. 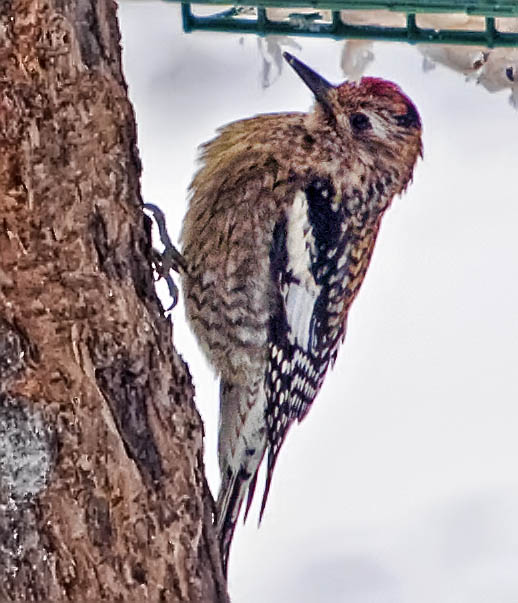 I had been looking forward to a trip to Gloucester on Cape Ann with VT birding group but this was canceled because of the storm that moved in this weekend. I am going to catch the next nice day and do it on my own.

A few days ago during a rare warm and sunny day I got some photos of Common Goldeneyes in flight over the Power Canal at Turner's Falls in MA. 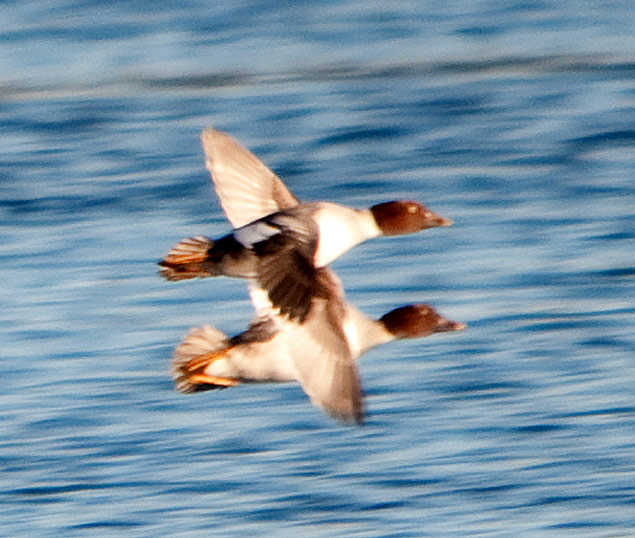 Two females; I am not sure whose wing belongs to whom 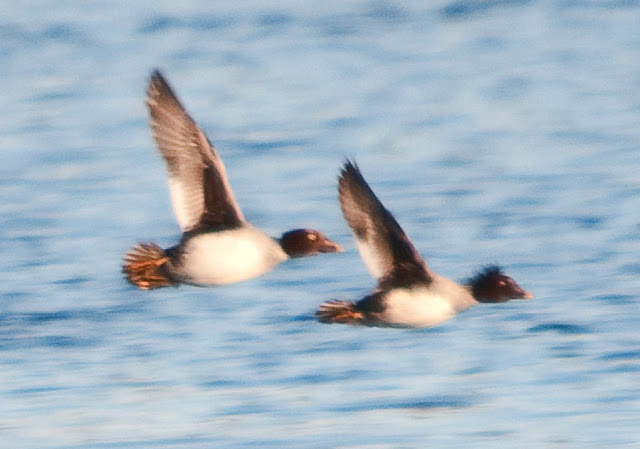 The same pair no longer entangled 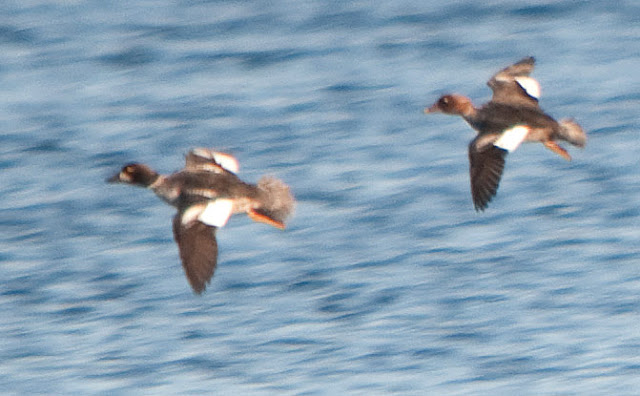