Thanks to JoAnne Russo, who posted a report in the VTBird list,  I was finally able to see and take a photo of an adult male Black Scoter which was swimming around by himself on a small pond in Newfane, VT. It's another life bird for me and I had been looking for one all  fall after reading various reports in the VT, NH and Mass birding lists. 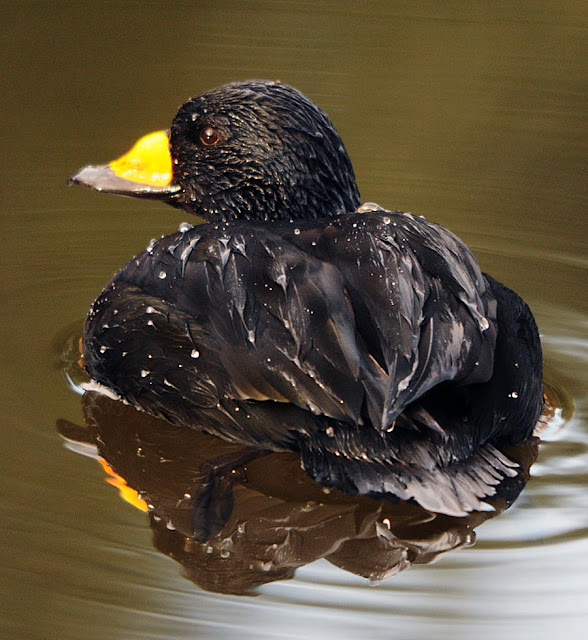 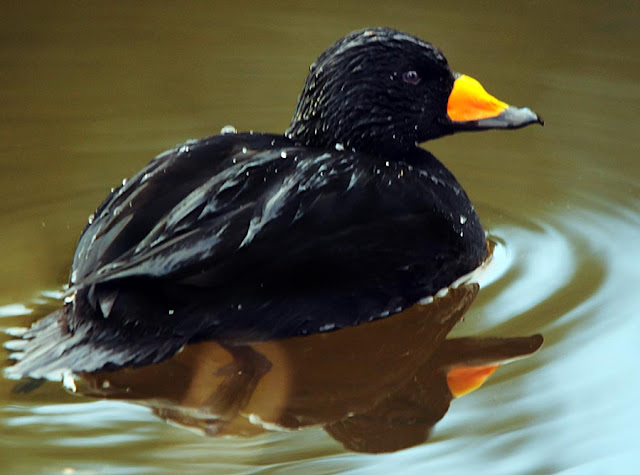 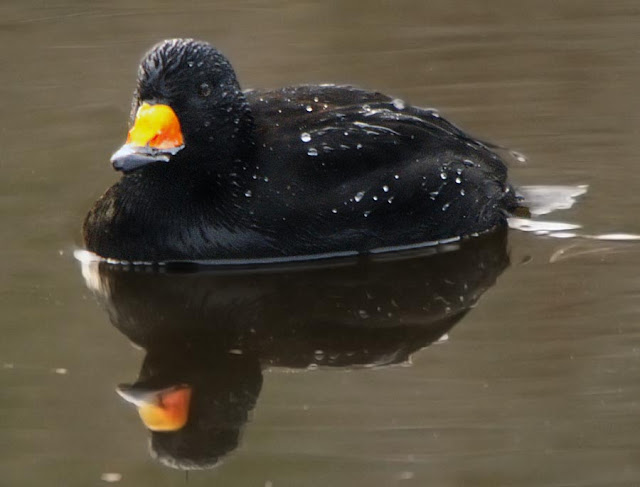 Well, enough. It's off for the holidays!

I have been experimenting with HDR (High Dynamic Range) imaging. It's a technique of fusing several images taken with different exposure, i.e. over-, under- and correct exposure, resulting in an image which contains a wider range of very dark and very bright areas than would ordinarily be possible. Since there is always a small delay between each exposure the images are best taken with the camera on a tripod. Handheld images, like mine,  usually result in some ghosting and are never quite sharp.

Here is my first effort, a view from our deck on the wetland next to our house. I used a demo version of Photomatix. The sky often comes out gray and has to be corrected in Photoshop. In fact most images require further editing in Photoshop: 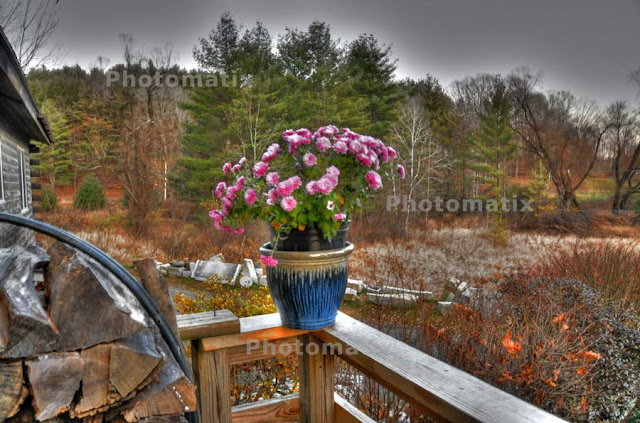 Here is a landscape taken in late afternoon sunlight: 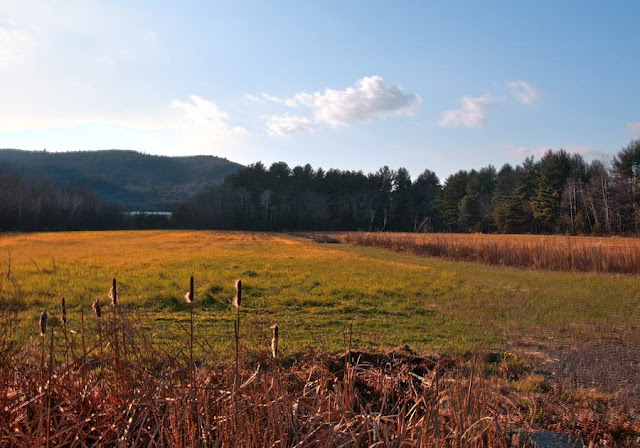 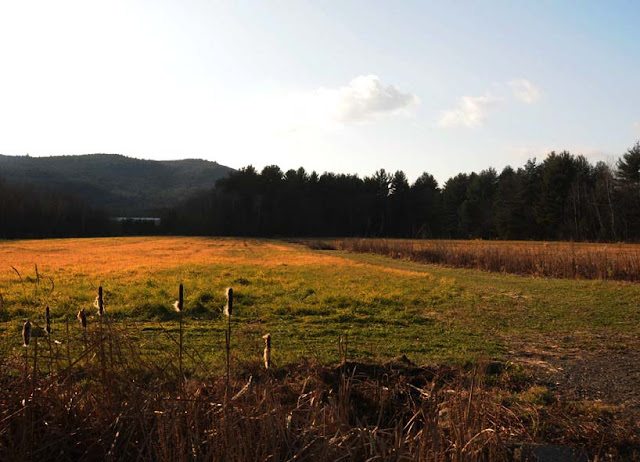 
A mall in Keene: 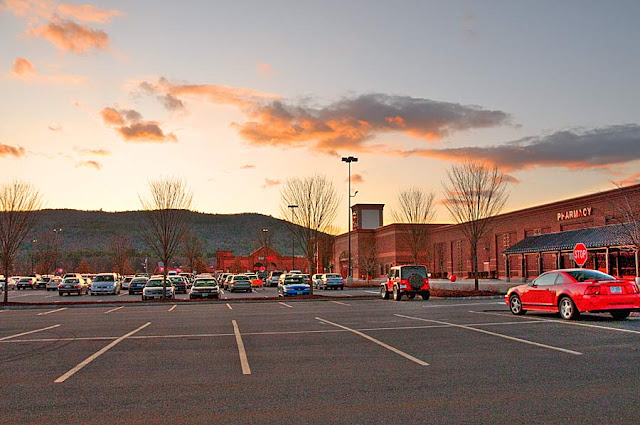 The technique is derived from 3-D imaging in video games and many of the images on the net are still reminiscent of a toy-size model set-ups. One give-away of an HDR image is the appearance of a sky with unusually dramatic cloud formations. Here is a site that explains the technique and has some good examples along with  tutorials: Stuck in Customs. I am not sure how far I am going to go with this. I generally prefer more natural-looking images but it might be fun in the winter when there are not many birds around.

While walking on the railroad trail behind the shopping mall in Keene a Great Blue Heron suddenly appeared overhead. It was the same one I had been observing for much of the summer and fall, first as a juvenile and now as a grown bird. He'll soon be off going south. 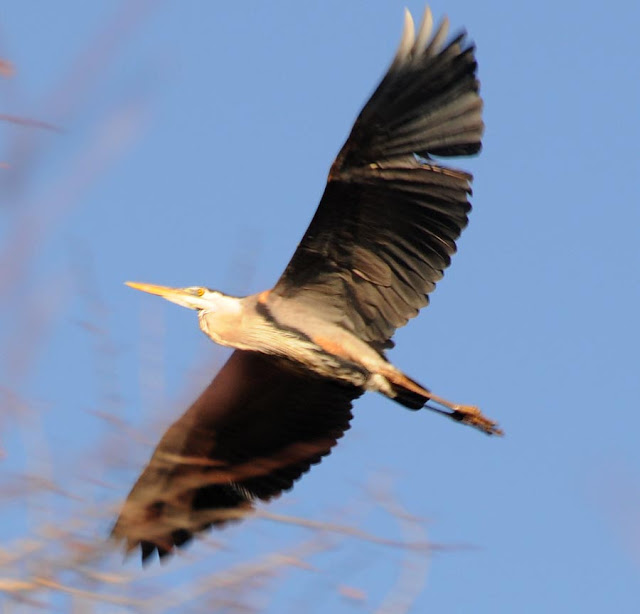 Good Birding! And Happy Thanksgiving. For us it's off to Michigan again for a week to visit family.. 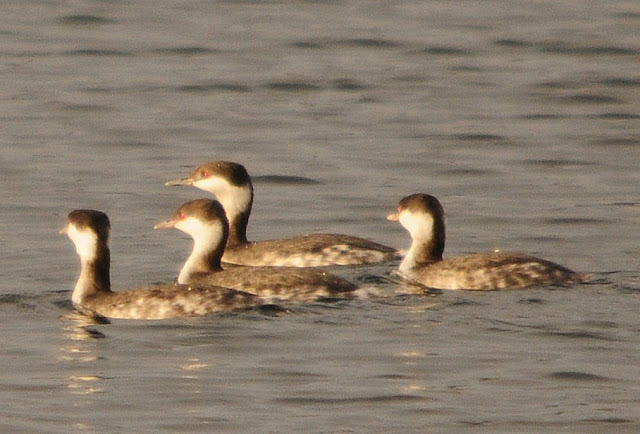 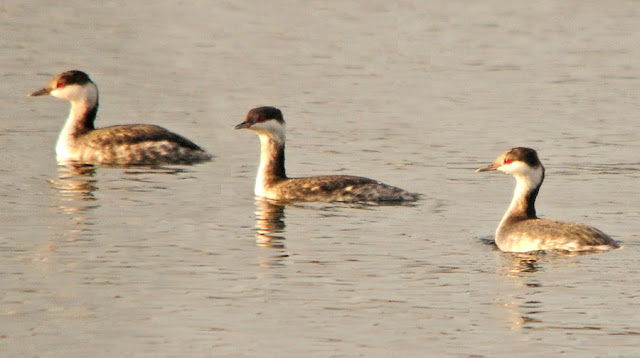 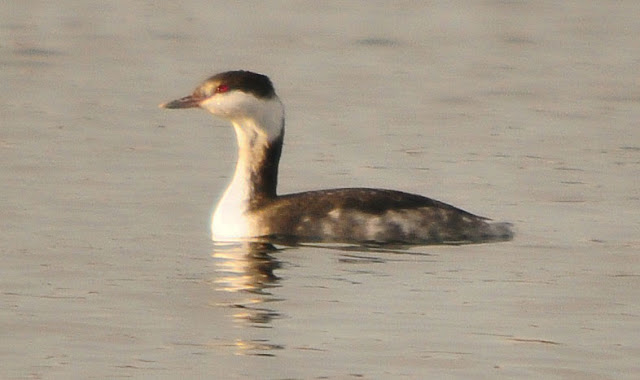 When walking back up I saw many American Robins and Blue Jays in the bare trees lining the road and the adjacent meadow. Suddenly I was stopped short by the unmistakable squeals of a Red-tailed Hawk which seemed to come from a mixed thicket of young pines and deciduous trees off the path. Robins kept flying into the pines and out of view. The squeals kept coming and then, just as suddenly, stopped. The Robins reemerged unscathed and flew off. I never saw a hawk and I am wondering whether the cries came from a Blue Jay practicing his hawk imitation, but I'll never know.
Posted by Hilke Breder at 4:39 PM 9 comments:

I like how the tree trunks line up against a pale sky, pure, without the confusion of leaves, the way the pasture is still summer green when all else has turned brown, the way the rows of stubble on the cornfield follow a rhythm of their own. But the days are too short and the moon rises too soon ... 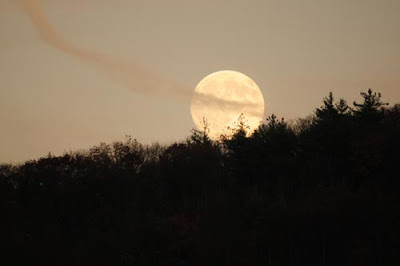 Most of the summer birds are gone but there are still those that stay with us through the winter and visit our feeders, the Chickadees, Blue Jays, Nuthatches, Tufted Titmouses, Mourning Doves, Gold Finches and Northern Cardinals. 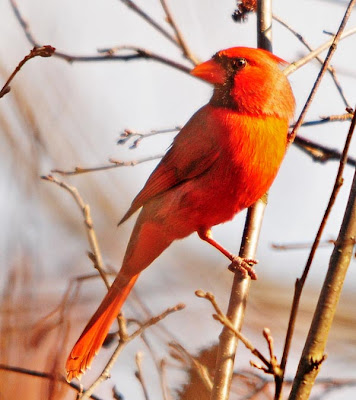 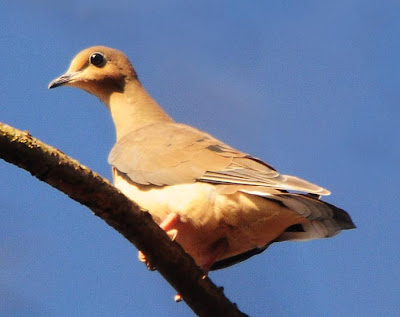 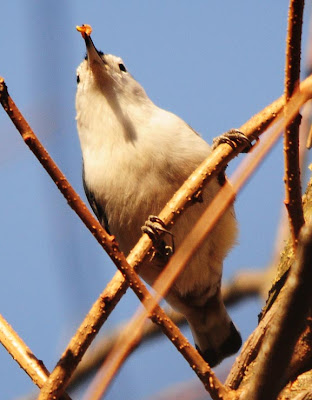 Yesterday I went looking for the Cackling Goose reported to be on the Power Canal in Turner's Falls but found the search among about a thousand Canada Geese on the water too daunting and soon gave up.

For Birding it's "In-Between" Time

That's also true for the tourist trade in Vermont. The leafpeepers are gone and the skiers have not yet arrived. Restaurants and inns are hurting for business and offering specials which makes eating out a bit more affordable. Most leaves are off or hanging on by a thread, to be taken by the next puff of wind. There was a little bit of snow on the leaf-strewn lawn in my yard - time to move the potted plants inside. You have to really look hard to find birds this time of the year - most local ones have left and the migrants have become sparse. I spent much of the morning looking for a couple of Long-tailed Geese on the Retreat Meadow waters that a friend had mentioned in an email to me, but no luck yet...

Instead I saw a couple of American Tree Sparrows, a Field Sparrow, a Ring-necked Duck, many Common and Hooded Mergansers and flock after flock of honking Canada Geese that flew in for a day's stop-over. When I first arrived there were just three and when I left, several hundred of them had settled in the shallow water and on the sandbanks.

The Tree Sparrows are easily recognized by their bicolored bill. 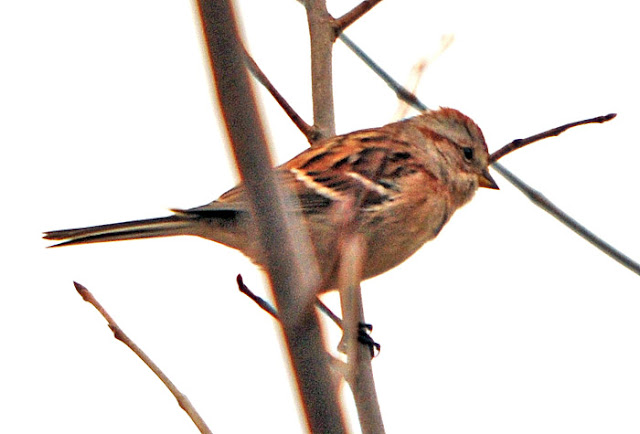 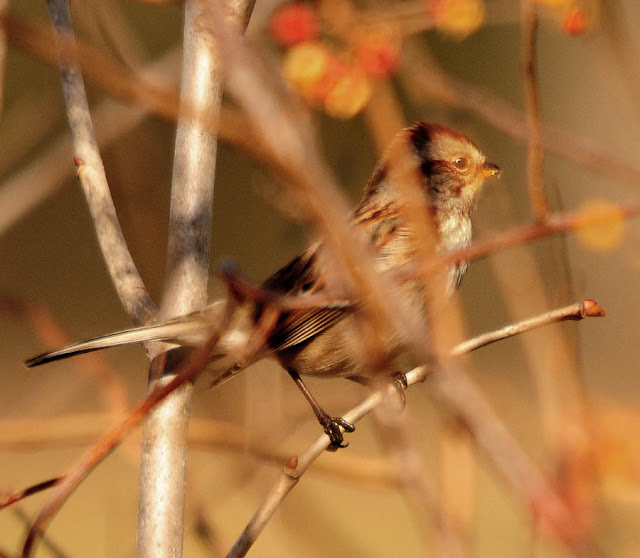 Yesterday a pair of male Buffleheads on the West River: 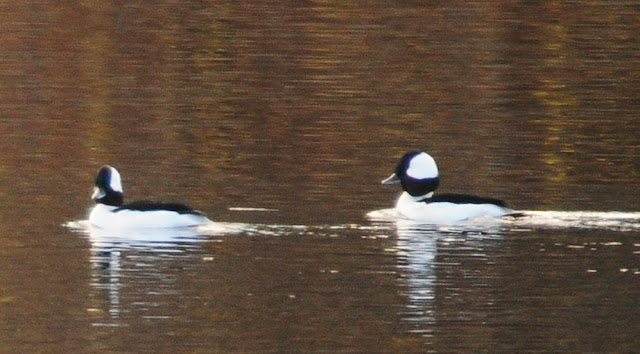 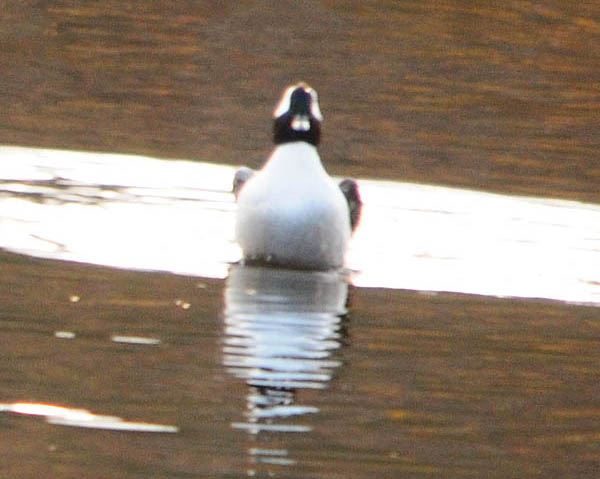 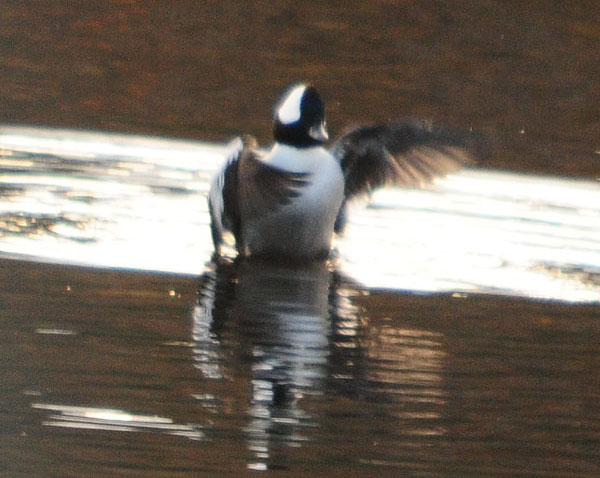 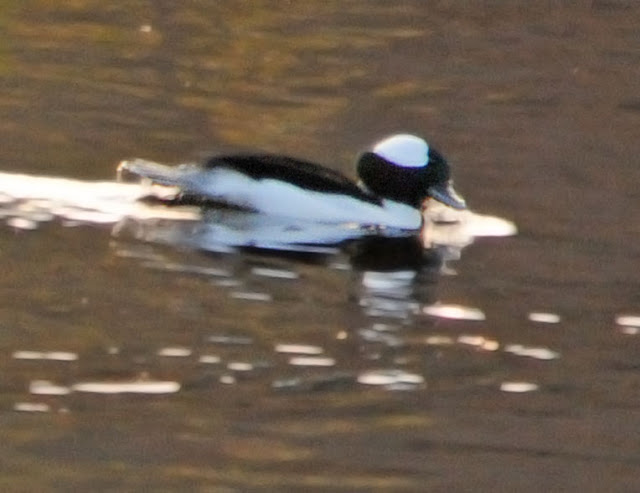 Bufflehead is probably a translation of the Latin species name Bucephalus which also includes the Goldeneyes, meaning ox-head, in reference to their large head, compared to body size, and the steep forehead.

Yesterday I  became all excited when I saw a large raptor circling overhead over the river. It looked like a Bald Eagle, since it was almost all dark. However when I studied my photos at home I had to concede that it was a juvenile Bald Eagle. It could have been a Bald Eagle if it didn't have the white on the underwings which I learned is never ever found in that species. 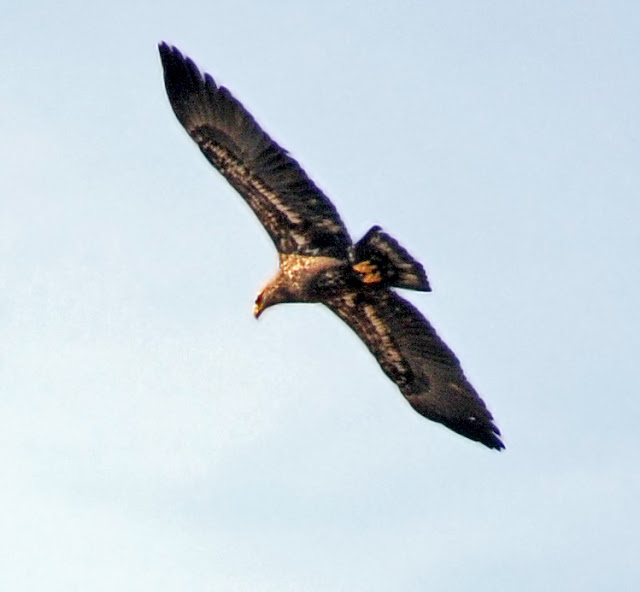 I hope the Long-tailed Ducks will stay around. I'll try again tomorrow.