Yesterday I observed a Canada Goose with a peculiar head tuft pursuing another goose, presumably a female, on the Power Canal in Turner's Falls, MA. I took some photos and submitted a couple to the avian forum on Naturephotographers.net. The responses were interesting. 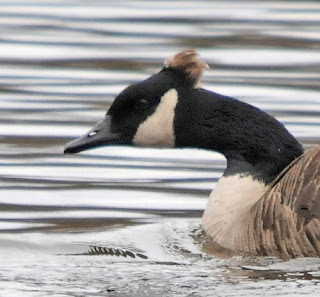 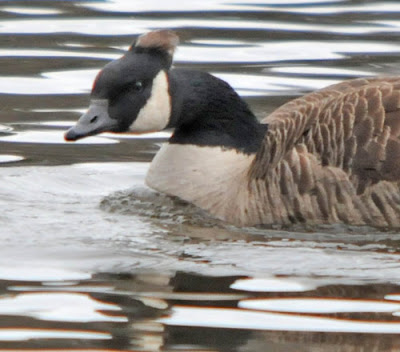 Here is the most interesting response:

"I think Jim DeWitt is spot on, in the sense that the term "tumor" means literally "a swelling or lump"! As a veterinary pathologist (Ret.) with particular interest in wildlife diseases and more than two decades of specific interest in avian diseases I must say I've never seen such a lesion in any bird. However, the feathers growing at the site in question are of a size and pigmentation quite different from those normally produced in that species in that particular feather tract. It thus is strongly suggestive of a congenital anomaly (which could include, but probably doesn't in this case, a genetic mutation) resulting from displacement of cells from a site destined to be in another another feather tract to this site early in embryonic development, probably within the first day or two of incubation. Without the opportunity of thoroughly examining the affected tissues under a microscope, I can only suspect that this is, in technical terminology, an example of a epidermal heterotopic pterylogenic hamartoma ( a mass characterized by anatomically displaced but otherwise normal and functional skin and feather follicles from another feather tract). There is another condition ( which IS documented in birds) characterized by the growth of multiple feathers from a single feather follicle. However, in this condition of follicle polypterylosis the basic features of the feathers so produced as regards pigmentaion and size are generally consistent with others produced in the same feather tract, save for some physical deformations associated with developmental crowding in the distended follicle.


Yeah. That was probably overkill, as my grad students and residents used to say....
Dave Graham, South Dakota"

What do you think?

If it's due to a gene mutation and inheritable, and is attractive to female CG,  we may soon see little goslings with head tufts and perhaps observe the process of evolution close at hand :-) !!
Posted by Hilke Breder at 9:24 AM