It's an odd sound; loud and piercing...you'd never suspect it comes from a bird but a monstrous frog, or ueber-insect*. You'd never guess it's from a homey-looking butterball of a bird.

For the past three evenings I have been listening to a Woodcock peenting nearby in a low lying wet area of tangled brush, fallen trees and small clearings,  advertising his position to local females. Last night, using a flashlight, I finally got a glimpse of him standing amidst clumps of dead weeds and last year's grass.

At dusk  I'd see him rising high up in the air and spiralling in wide circles all the while making a twittering, whistling sound with his wings. After a while the twitters change to chirping, gradually getting louder, then silence as the bird descends among the trees to land in a clearing 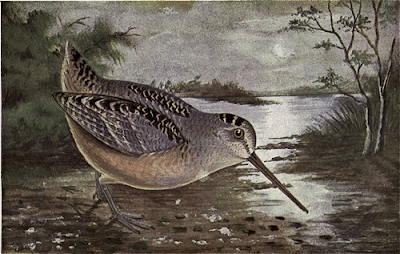 I managed to get a recording of the song. Here is snippet of the spectrogram. and wave pattern

There are four types of sounds: the thin nasal  buzzy "peent" call preceded by a barely audible "tuko" sound, the twittering made by the wings during sharp turns, and the vocal chirping during during aerial flight which becomes louder as the bird descends. The last part of the descent is silent. Then a soft fluttering of the wings as the bird lands.

I have been holding off publishing this to try to get a photo, going out at dusk every day but no luck. The first day was the best one in that the bird landed not 5 feet from me, but my camera was not in position. I got a good look at him though, as he was standing in the grass, making soft "tuko" sounds, that sound to me  like the cooing of a dove, only much briefer. After a couple of minutes he started "peenting", sounding like a sharp ripping and tearing of paper.

Anyway I never got that lucky again. Every night he always appeared just at the opposite end of the clearing from where I had positioned myself. . Although I was then able to approach him to within a few feet, by that time it was too dark, despite the almost full moon, to focus my camera - so I got just a bunch of blurry pictures of weeds and shrub. ..

The moon however was beautiful.
. 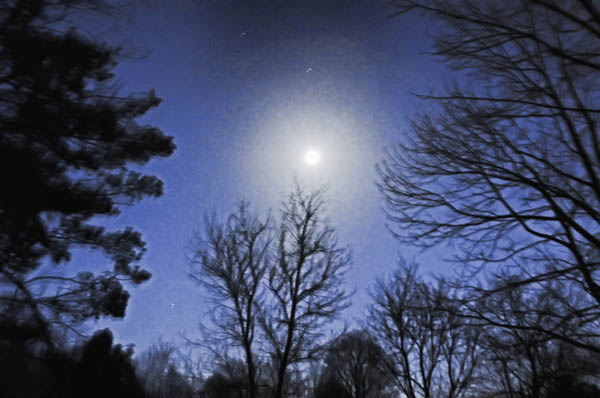 *It's not in the dictionary. I took if from Nietzsche's "Uebermensch", or superman.
Posted by Hilke Breder at 10:36 AM