On August 9th I went on a whale watching/birdwatching trip out of Newburyport, MA. We didn't see many birds, nor many whales. On the way out we passed a beach. The air was shimmering in the heat. I focused my camera on a tern as a couple of beach goers and their dog were walking by 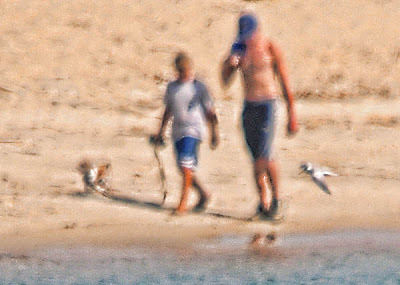 We passed the breakwater at the mouth of the Merrimack River. Terns and Ruddy Turnstones were lounging and preening on the rocks.
Out in the open water on our way to the Southeastern edge of Jeffrey's Ledge we encountered a Minke Whale and a Right Whale , unusual in this location - they are ornery animals; there was a report from South Africa a couple of weeks ago that a Right Whale breached on a sailboat; luckily no one was hurt. We stayed at the safe required distance of 500 ft.

We returned to port at 4:30 PM. I didn't want to get stuck in the rush hour traffic around Boston and decided to head out to Plum Island. I parked at Sandy Point and walked to the tip of the peninsula. It was low tide. As soon as I skirted the roped-off area off the beach I was being dive-bombed by irate Least Terns, defending their territory. I had to raise my arm to ward them off and saw one coming pretty close squirting white poop at me. Fortunately it missed. This kind of behavior seems to be universal in the animal world  - I guess  it's  the ultimate insult. I retreated a few paces and after a while they left me alone.

I took photos of a tern settling down in the sand. When I looked at  them at home I saw that it was settling down on a couple of eggs. Here is a sequence of shots: 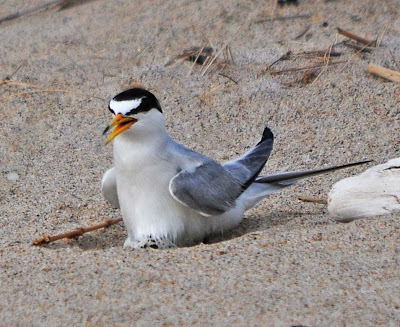 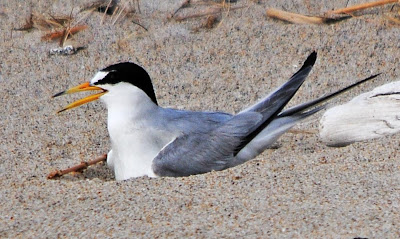 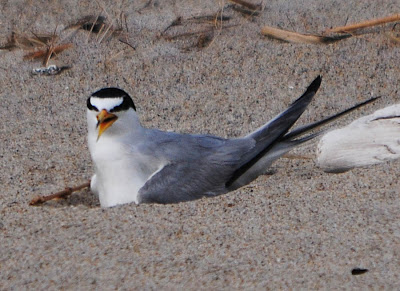 This is quoting from Cornell's Birds of North America site: "Renesting commonly follows nest or chick loss; up to 3 nests/season. Least Terns display second wave of nesting, involving birds that have lost clutches in the same colonies, renesting birds from other colonies, or younger birds (2–3 yr old) that are breeding for first time (Massey and Atwood 1981).
These late-nesting birds usually insert themselves within existing colony, selecting sites used by earlier pairs or areas with little or no prior use (Massey and Atwood 1981)."

I also observed courting behavior with the male presenting a small fish to the female. I didn't actually see the female accepting the fish. 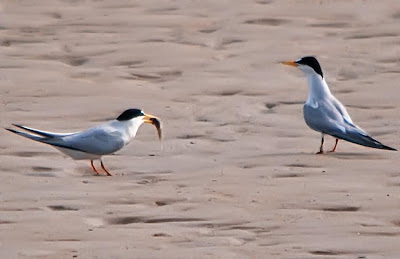 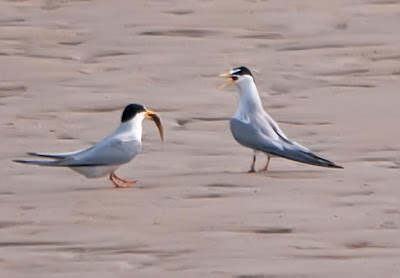 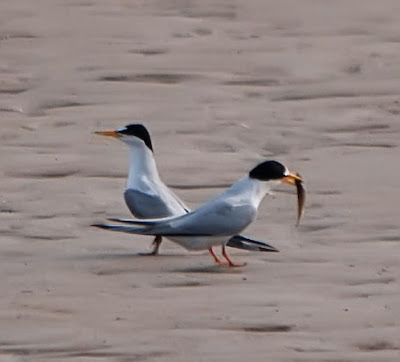 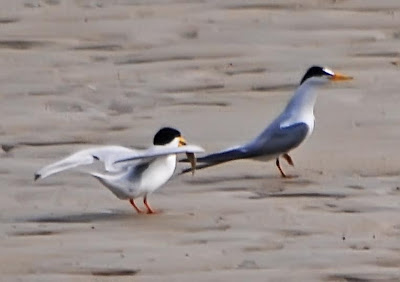 I also saw several Piping Plovers in the same area, but did not take any photos since I already had so many from my previous trip. I did not look for the Scissored-tailed Flycatcher, although I saw a couple of birders in the distance who apparently were. It was getting late, time for me to drive home.

Thanks for stopping by. Please leave a comment if you like.
Posted by Hilke Breder at 2:36 PM