They are polar opposites: one gathering in large noisy flocks on tall trees, the other mostly solitary, skulking through dense brush, one a pushy despised immigrant, the other a rarely seen native. Starlings are the high flyers. Fox Sparrows stay low to the ground. I just happened to run into both species on the same day a couple of weeks ago.
﻿
﻿

According to Birds of North America, the European Starling numbers more than 200 million today, all derived from 100 individuals released in Central Park in the late 19th century. They are ubiquitous and highly visible, gathering in large flocks in the fall.
"Following the annual (Prebasic) molt (mid-summer through fall), most head and body feathers have whitish or buff terminal spots. These light spots gradually wear away to produce the glossy black appearance of spring, although most birds retain at least a few of these spots."
The Fox Sparrow is a common but shy species, breeding north of us in boreal Canada, and appearing, solitary or in small flocks, in New England during migration. It prefers dense vegetation and little is known about its habits.

I was fortunate in that my dog rustled up this individual from the underbrush. It appeared very briefly in the bare shrub and quickly dropped out of sight again.﻿ All I could get was a couple of lousy pictures.
﻿ 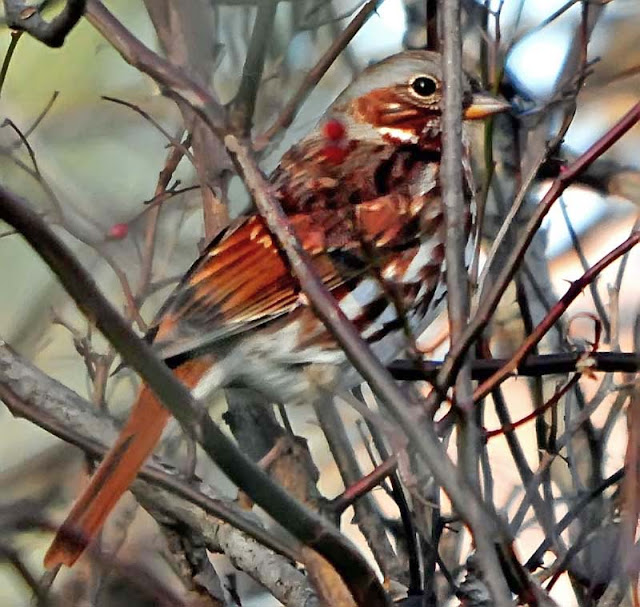 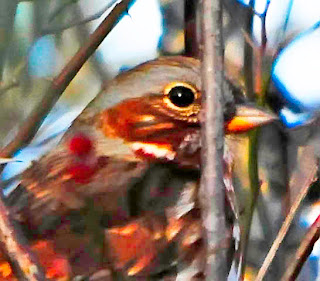 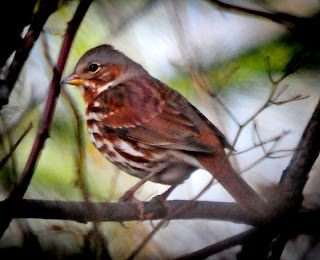 The skies have been particularly beautiful this fall.
﻿
Thanks for stopping by. Please leave a comment.﻿