It's already late in the fall migration for many shore birds. So, when I went on a day-trip to Plum Island last week, I only saw small numbers. The beaches, that had been closed to protect nesting Piping Plovers, were soon to be opened, but a few vacationers had already made it into the restricted area at Lot # 1. 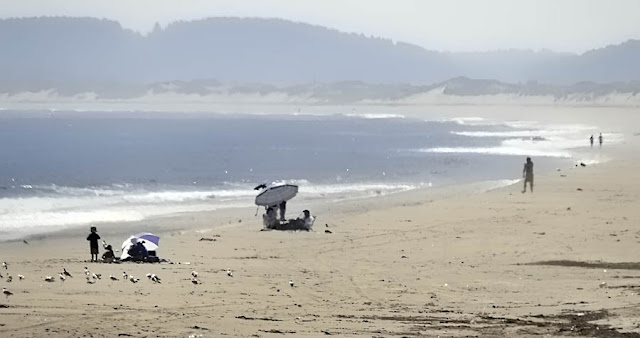 At the end of the day I came home with 400+ photos which needed to be sorted and put into neat piles of keepers and losers. Each one requires a trade-off between keeping too many and being overwhelmed, or being too thrifty and later regretting it. Best to sleep over it and leave the ultimate deleting for another day. It's late in the day, I am tired and have to be careful not to go on deleting binge as I have done before.

Now I know why:

According to a recent article in the New York Times Magazine about decision fatigue, each day we only have a limited supply of mental energy, and all decisions that we make will lower it bit by bit. Most decisions are not clear-cut Yes' or No's, but myriad Maybe's that sap our strength and render us unable to arrive at good choices at the end of the day.That's when we throw caution to the wind.  Glucose, however, partially reverses this depletion; so taking a break with a candy bar is not all bad. 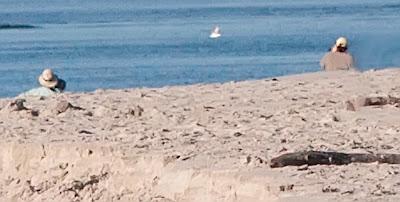 Two early morning birders
I had left at 4:30 AM because I wanted to get there by 7 AM, well before the limited parking at Sandy Point at the very tip of Plum Island was filled up. Mine was the fourth car on the lot. I packed my gear and made my way down the sandy path to the beach.
There were already a couple of birders on the beach. I ran into one, who was on his way back, and couldn't let him go by without asking, "See anything? Any Forster's?"  He replied he had seen one Forster's at the very tip of the sand spit, but otherwise nothing out of the ordinary. -- I should add  here that Forster's Terns forage and breed in marshes and wetlands and are not that common right on the shore. 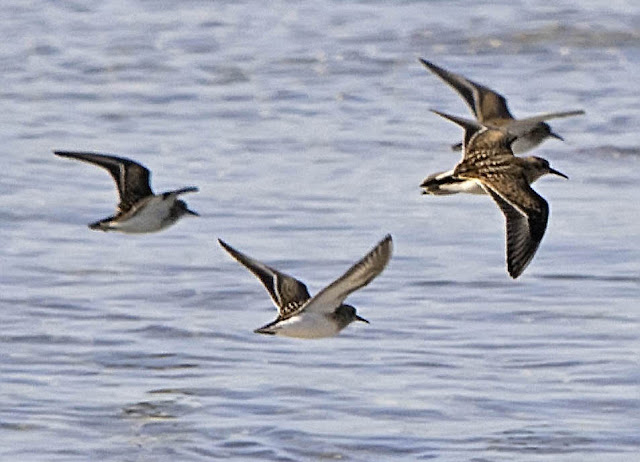 Small flock of Semipalmated Sandpipers flying along the water's edge.
Although many shore birds had alreay left on their fall migration and were largely absent, there were many terns, both Common and Least. 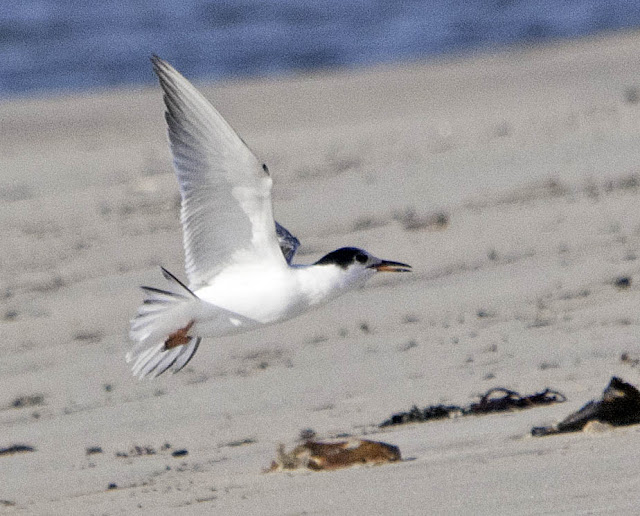 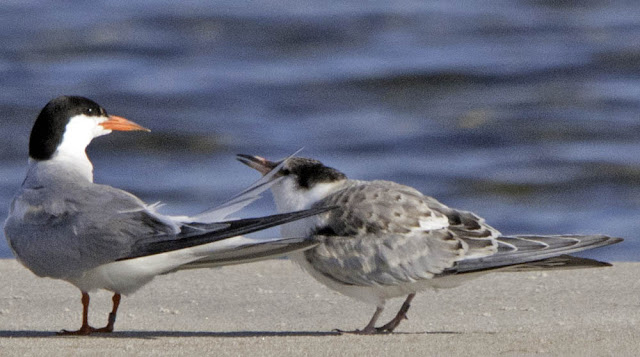 There were lots of begging Common Tern juvies whose parents were trying to ignore them, often looking annoyed. Occasionally though one would bring a fish. 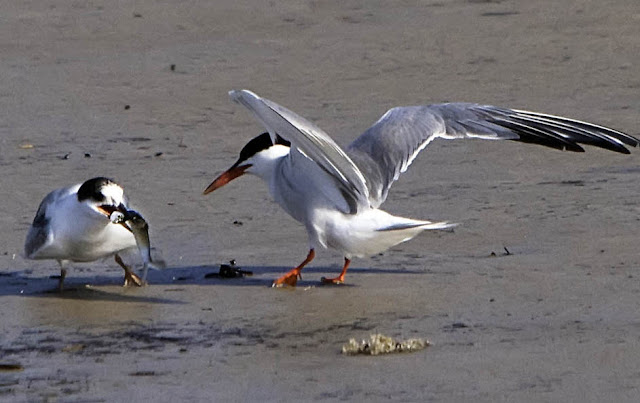 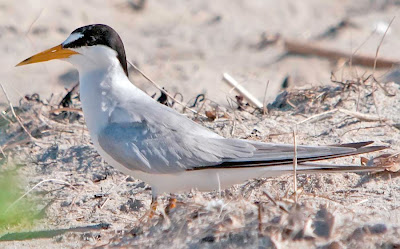 Least Terns were also there in good numbers, more juvies  than adults. 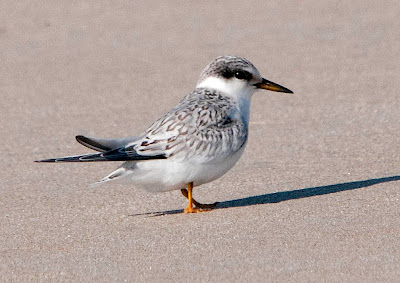 When at home I scrutinized the shot below of two flying terns I thought they looked suspiciously like Forster's, but Forster's and Common Terns are notoriously difficult to differentiate. I turned to Birdforum.net to help with the ID. Here is the thread:

http://www.birdforum.net/showthread.php?t=208882. According to one respondent, Smiths from Belgium, the left one was indeed a Forster's whereas the right one was a Common Tern. 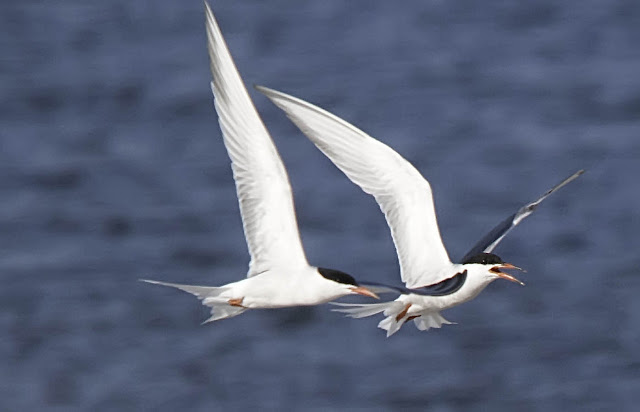 He gave a link to a sketch that helped him nail the ID. He writes:

"Based on this, the identification of the two terns in the photo becomes clearer, even though light conditions do not seem to be ideal. The left hand bird is definitely a Forster's; note extensive dark grey on central primaries, and white wedge on outers, almost like in a Black-headed Gull. Also, note bulging white loral area above bill base, and white underparts. I am not entirely sure of the right hand bird, but it looks more like a Common Tern to me: dark grey on the primaries is much more confined to the tips, there seem to be extensive grey blotches on belly and flanks, and the white loral area is much thinner."

REVISION: This can't be a Forster's tern which should show some white in the forecrown due to molt. Here is an excellent article on molts in Forster's Terns:
http://www.birdfellow.com/journal/2009/08/19/photo_essay_forster_s_tern_plumage_sequence


It was low tide and foraging on the  water-logged sandy beach was a solitary Piping Plover chick, as most adults depart on their fall migration by mid July.  It had the peculiar habit of putting one foot forward and letting it tremble in the shallow water, a behavior that I had not observed on my previous visit with Piping Plovers. It repeated the trembling with each step. According to The Shorebird Guide (O’Brien et al.) this foot-trembling feeding method causes prey to move and become more conspicuous. 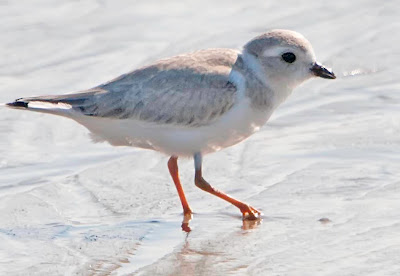 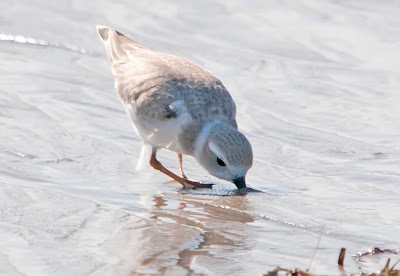 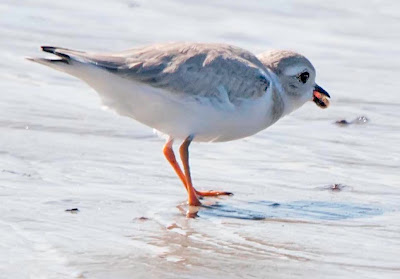 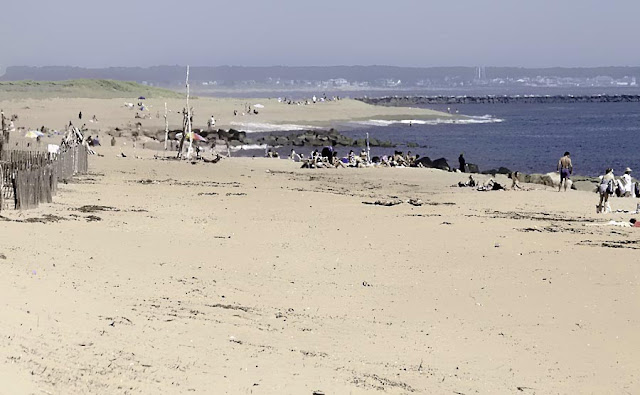 View toward the public beach at Lot # 1
By afternoon all parking lots were full and there was a long line of cars  at the gate house waiting for to be admitted. It was time for me to pack up and drive home. But I'll show more photos in my next post. In the meantime head over to World Bird Wednesday at The Pine River Review for some terrific posts from all over the world.
Thanks for visiting. Please leave a comment.