I am planning to go on a pelagic trip toward the end of August and was considering what fieldguide to take along, preferably one that didn't weigh much. For the past couple of years I'd been using the ufg guide (formerly "Peck") from Eduneer.com on my Palm TX and had been fairly happy with it, but it lacked photos of the seabirds I was expecting to see. Also the screen of the Palm is almost impossible to see in sunlight. I investigated other platforms and decided on the IPod Touch which looked beautiful on photos. I bought it at Amazon and downloaded National Geographic's Handheld Birds and iBird Explorer Pro for $14.99 and $29.99 respectively. Both performed nicely outside in partial sunlight, but I much prefer the iBird Explorer Pro which has a wealth of information, i.e.both drawings AND photographs, text, maps, audio etc, much more than the National Geographic program. Here are some photos of the critical test, how does the IPod Touch compare to the Palm under these condititons?

The first photo is a juxtaposition of photos, in partial sunlight, of a Orchard Oriole on the IPod Touch using the iExplorer Pro program, and on the Palm using the ufg guide. 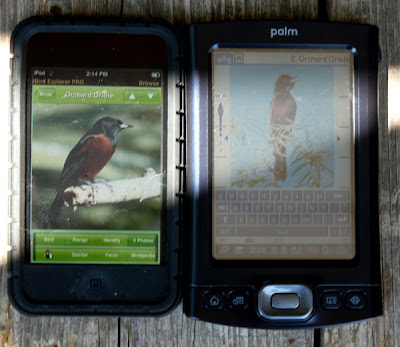 This photo compares drawings on National Geographic Handheld Birds, which has no photos, on the IPod Touch with the same photo as above on the ufg guide. 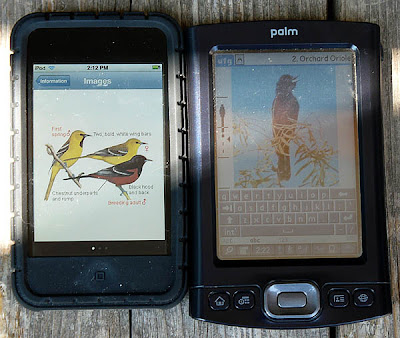 The last photo is taken inside, eliminating the sunlight as a confounding factor. 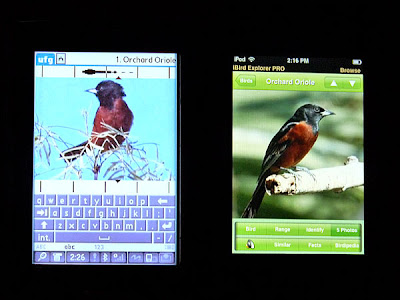 When held in direct sunlight the picture on the IPod Touch is recognizable whereas on the Palm it is not. Of the three birding programs the iBird Explorer Pro gets my vote. As to seabirds, it does great job too with both drawings and photos, range maps, facts, and Wikipedia which requires a wifi connection.
Posted by Hilke Breder at 2:42 PM