This is not a commercial....

In fact in advertising lingo it would be called a testimonial. But let me back up a bit. I have always envied a colleague of mine who used to wear a fishing vest to the office and hospital into which he could stuff anything he needed while rounding on his patients, whereas I was always dragged down by those things stuffed into my pant pockets or lab coat pockets. Now no more. I am talking about a photographer's vest.

After much research I settled on a vest made by an outfit called "Big Pockets". I was somewhat dubious about the color which was described as light sand but on the photo looked pink to me. Well it turned out to be perfect, even the color which was actually a pale sand with a hint of green. The fabric is soft and pleasant to the touch; it's light weight and has plenty of pockets

Here is what I can finally take along, whether I'll need it or not:
1) Extra battery for my camera
2) Lens Pen to brush off dust
3) iPod touch with the electronic birding guides (see Aug 4 post)
4) ID and some money
5) Cell phone
6) Recorder for those bird sounds I can't identify; so I can check on them at home
&) Extra flash card (to avert disaster when I have run off without one in my camera)
8) A small bottle of 98% DEET containing insect repellent
and 9) A small FLIP video camera, which I have not yet used, but you never know!


When out walking I am always looking for edible mushrooms and yesterday while walking along a forest trail I discovered a black chantarelle or "Horn of Plenty" - it's the best eating mushroom I have ever had. Although listed in my mushroom book as numerous, it's been about 15 years that I found my last one. They are very hard to see in the leaf litter as they look like a small trumpet-shaped curled-up grayish leaf. There was just a single one despite my scouring the immediate surroundings for more. 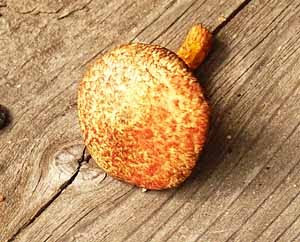 I also found some "suillus pictus" (see photo), a member of the bolete family, which grows near eastern white pine, is truly common and is listed as edible and choice. So I used the handful that I had picked in a small delicious side dish.

(Just a word of caution: don't eat any mushrooms with which you are not absolutely 100% familiar!!)
Posted by Hilke Breder at 1:34 PM